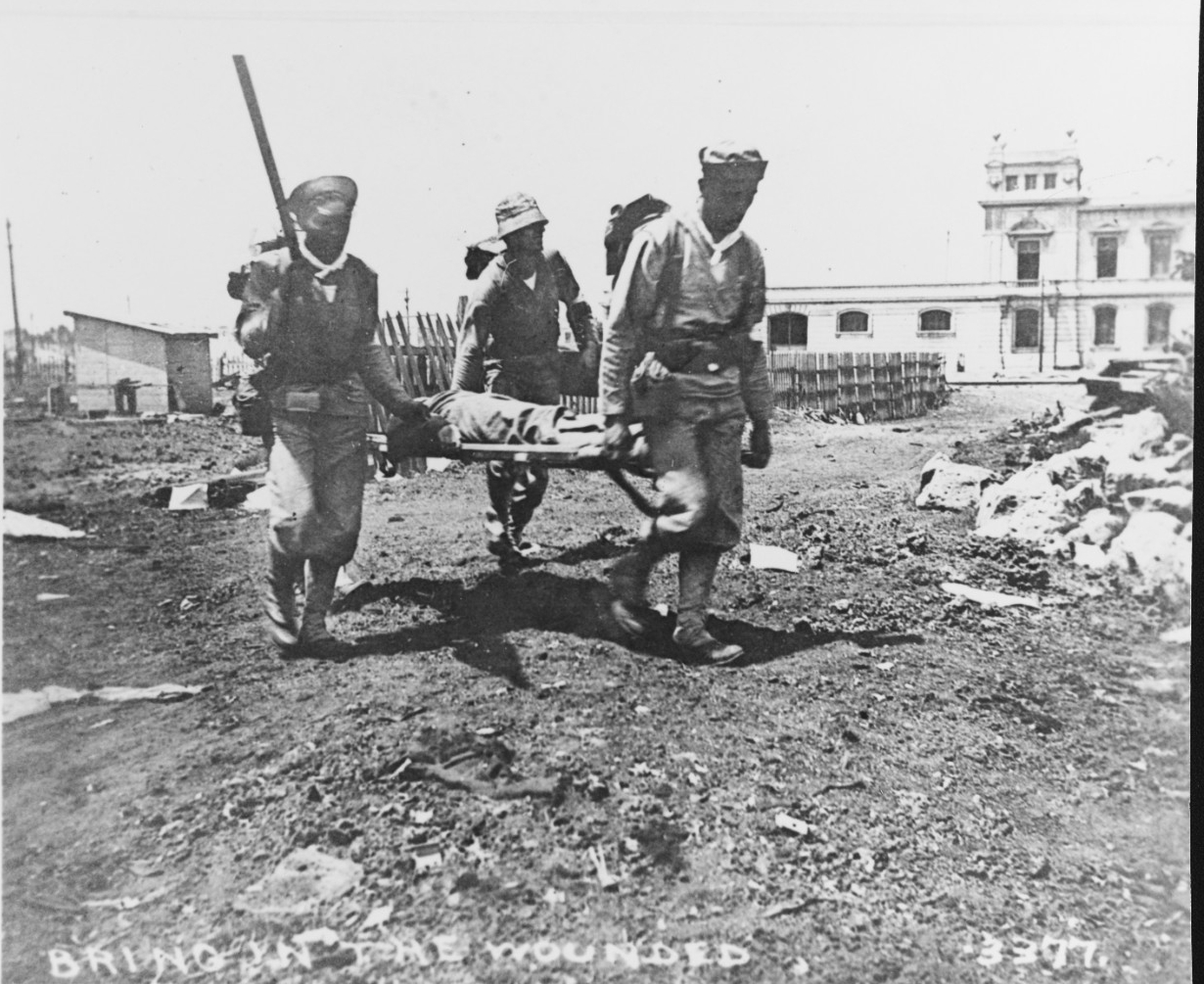 Sailors from the battleship Florida serve as stretcher bearers in Vera Cruz, Mexico, in April 1914. (NH 123378)

Even as the First World War engulfed Europe–but long before the United States joined the fight–American troops saw action much closer to home. April to November of 1914 saw American troops deployed in Mexico. Over these few months, a total of 56 Medals of Honor would be awarded to the men of the Army, Marine Corps, and Navy. Two of the men who earned this honor were surgeons of the Navy Medical Corps. The bravery of Middleton S. Elliot and Cary D. Langhorne will be remembered forever through their membership in the elite fraternity of Medal of Honor recipients, but sadly, we know very little of their specific actions during the fighting.

During the Mexican Revolution, the United States had an unusual relationship with Mexico, supporting both sides at different times. This led to some contentious interactions over the near decade-long Mexican civil war. Eventually in April, nine Sailors were arrested by the local government while attempting to buy fuel in the city of Tampico. They were released the next day with an apology, but it was not enough and President Wilson, and what would be called the Tampico Affair, led to the invasion of Vera Cruz. Another factor pushing Wilson towards intervention was a shipment of arms that were to be delivered to the Mexican government in violation of the U.S. arms embargo. Seizing the port of Vera Cruz would prevent these arms from arriving.

On 21 April 1914, the Navy and Marine Corps began to take control of the port city of Vera Cruz, which was also home to Escuela naval military (the Mexican Naval Academy). Several ships were involved with unloading troops, including the gunboat Prairie, Utah (BB-31), New Hampshire (BB-25), and Florida (BB-30). The Marines and Bluejacket Sailors quickly took to the streets and seized several important locations near the beach. The Sailors and Marines began to meet resistance that continued unto the next day as the forces began to push to the Escuela Naval Military. Most fighting ended by the 23rd of April and on the 26th martial law was declared and the city came under military control.

Two of the men who received the Medal of Honor for their actions in the fight for Vera Cruz were naval surgeons who participated in the landing. The men were Middleton Elliott and Cary Langhorne. Only four Navy physicians have received this high honor, and two received it in this conflict by risking their own lives to come to the aid of their military brothers during the first two days of fighting. Unfortunately, their citations offer few details into their conduct–we only know that they made themselves conspicuous in the midst of battle by their fervent efforts to save the lives of their wounded comrades.

Surgeon Elliott was responsible for overseeing the wounded and dying at the beginning of the battle. There were at least twenty recorded injuries that Elliott would have tended to as he established a temporary hospital on the beach. Surgeon Cary Langhorne supported the Marines as they engaged in street fighting throughout Vera Cruz, leading up the naval academy that was defended by locals. His actions involved putting his own life at risk to remove a wounded man near the entry of the naval academy.

Middleton Elliott went on to a distinguished naval career where he eventually rose to the rank of vice admiral and served in both world wars. Cary Langhorne retired soon after his time in Vera Cruz and lived out the rest of his life in Virginia.

“For distinguished conduct in battle, engagements of Vera Cruz, 21 and 22 April 1914. Surg. Elliott was eminent and conspicuous in the efficient establishment and operation of the base hospital, and in his cool judgment and courage in supervising first aid stations on the firing line and removing the wounded.”

“For extraordinary heroism in battle, engagement of Vera Cruz, 22 April 1914. Surg. Langhorne carried a wounded man from the front of the Naval Academy while under heavy fire.” 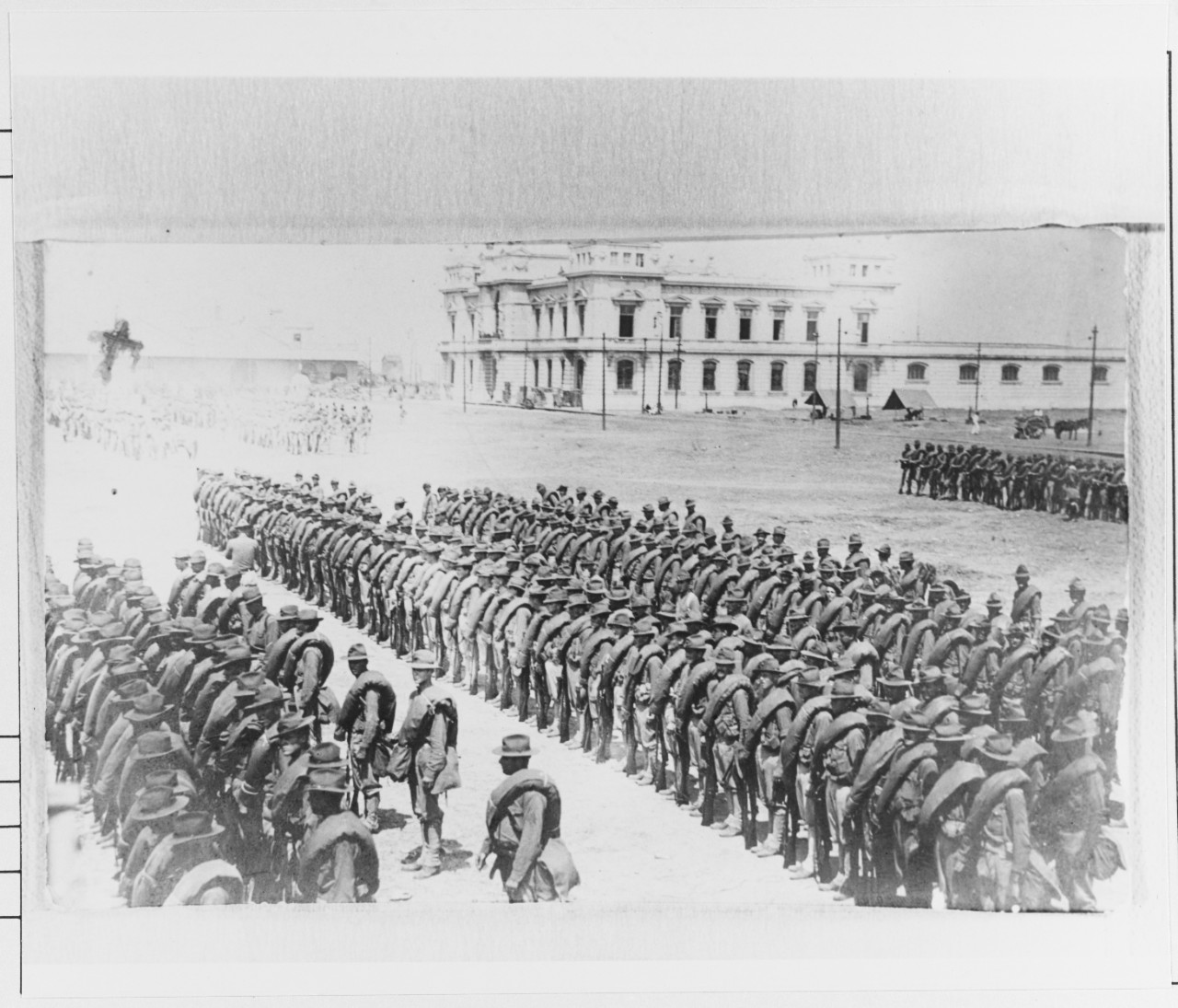 Naval contingents from battleships Utah and Florida and gunboat Prairie turn over control of Vera Cruz to Army on 27 April 1914. (NH123379) 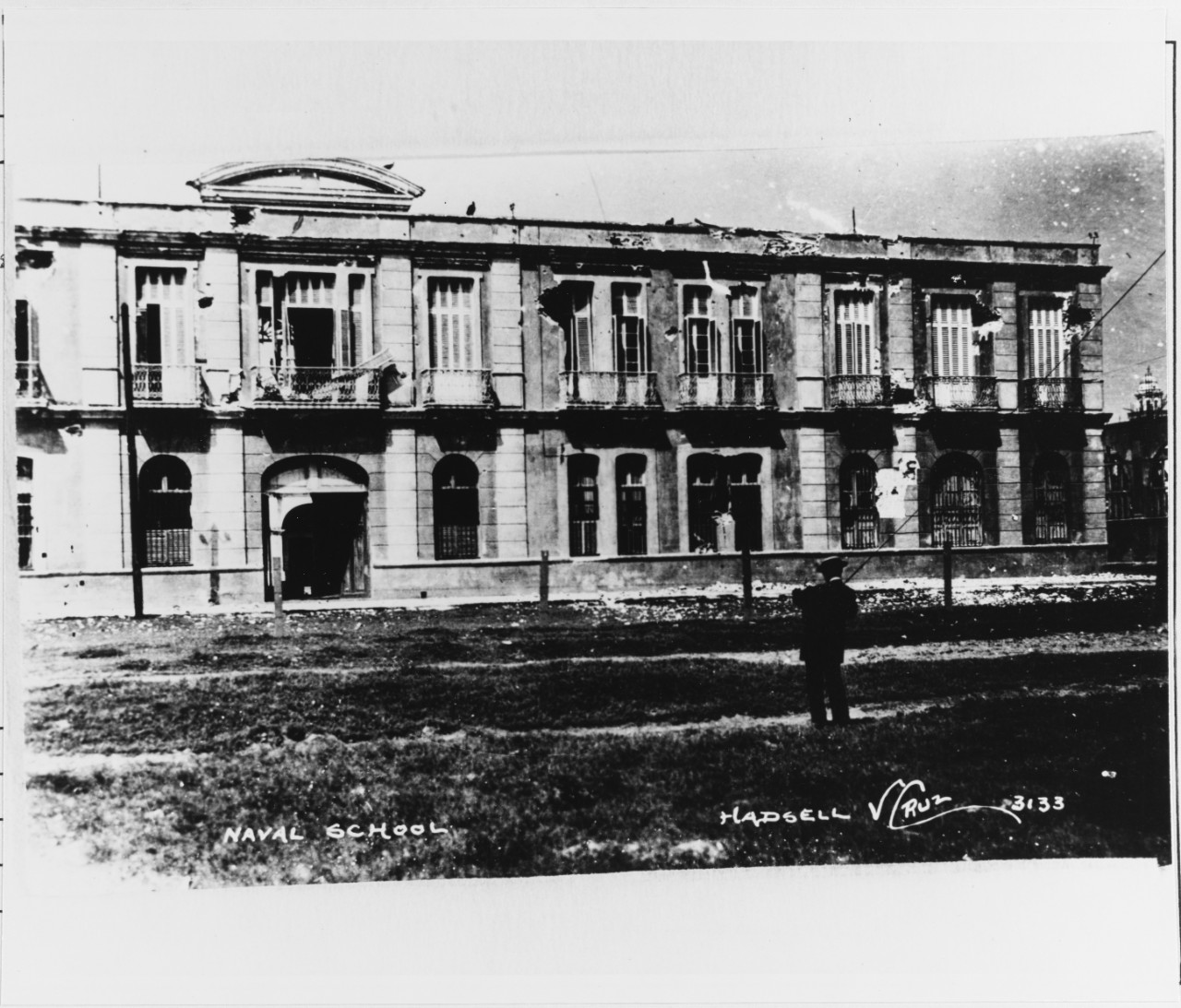