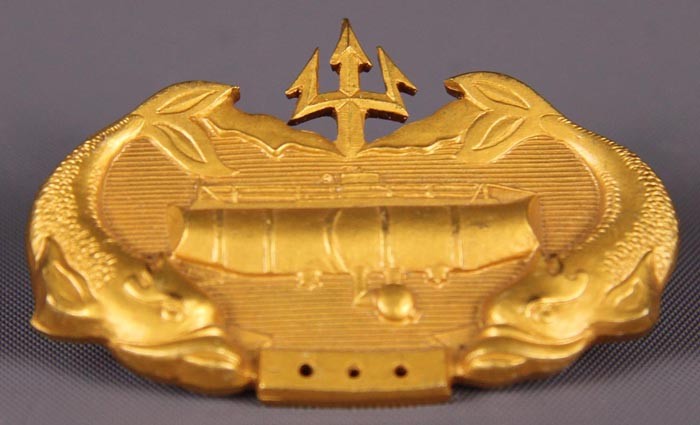 One brass insignia pin plated gold with two butterfly clutches on reverse.  Depicting a broadside of Trieste in the center, the bathyscaph is flanked by two heraldic dolphins with a trident in the background rising from the sea.   At the bottom, the holes are cast indicating degrees of qualification.  One star was a crewmember, two -  a copilot, and three - a pilot.  While attached to Submarine Development Group One (SUBFLOTONE), San Diego, California, Don Walsh designed the Deep Submergence Insignia prototype.  It was cast by a jewelry house in Florence, Italy.  In 1959, Walsh became Deep Submersible Pilot #1 because of his work with Trieste. 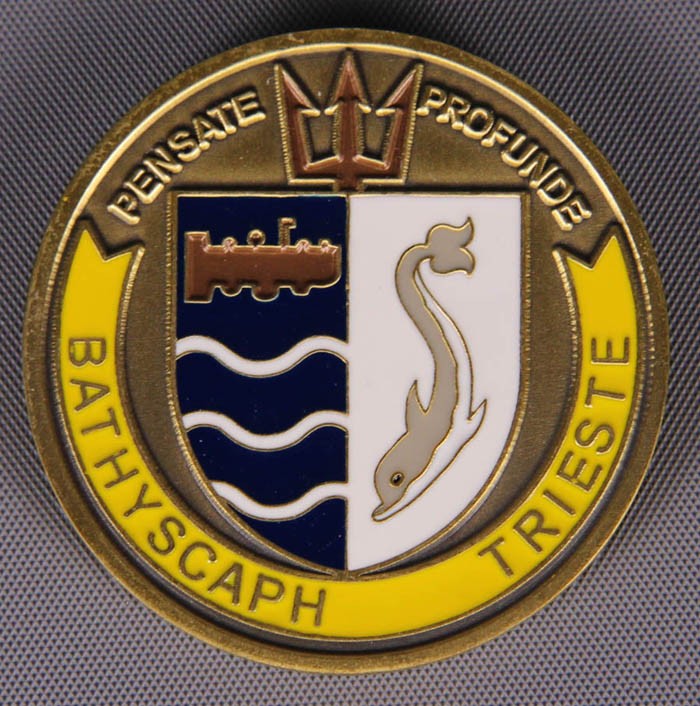 One circular challenge coin.  Obverse side contains insignia, or crest, of Trieste, showing a shield split into two sections with navy blue enemel with white enamel waves representing at sea.   Note the independent description of the bathyscaph.  The shield is superimposed over a trident.   A diving dolphin, in color with with a white enamel background, is on the right side.  The lettering above reads, "PENSATE PROFUNDE," which translates to "Think Deep."   At the bottom, a yellow enamel banner with lettering reads, "BATHYSCAPH TRIESTE." 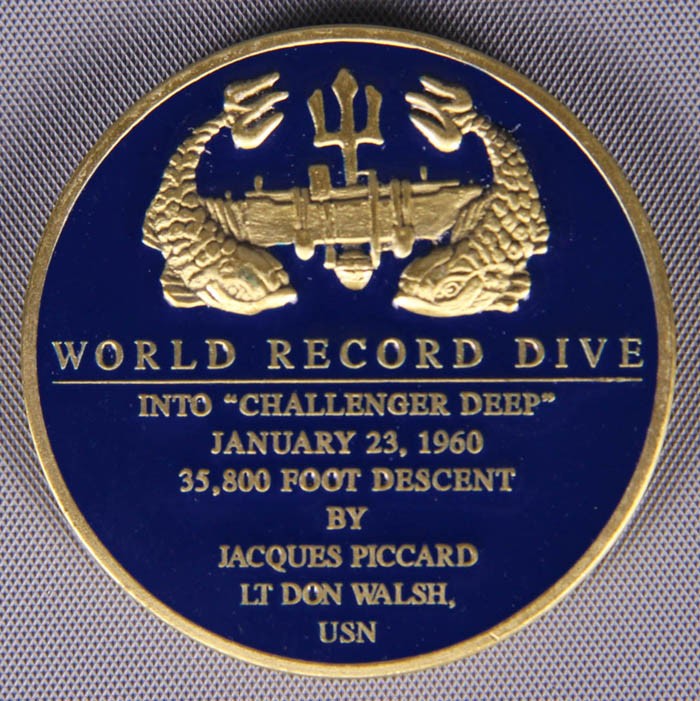 The origins and myths around challenge coins are not well known; however, the use of them within the military community and by U.S. Presidents is vast.   The tradition in which it gets its name, known as challenging, calls for the "coin check" and coins are usually drawn from pockets and placed at social gatherings.   Most times, the coins are drawn as a source of morale and comradery.  More commonly, the coins are given as awards for both admirable service and professional duty within a military and non-military context. 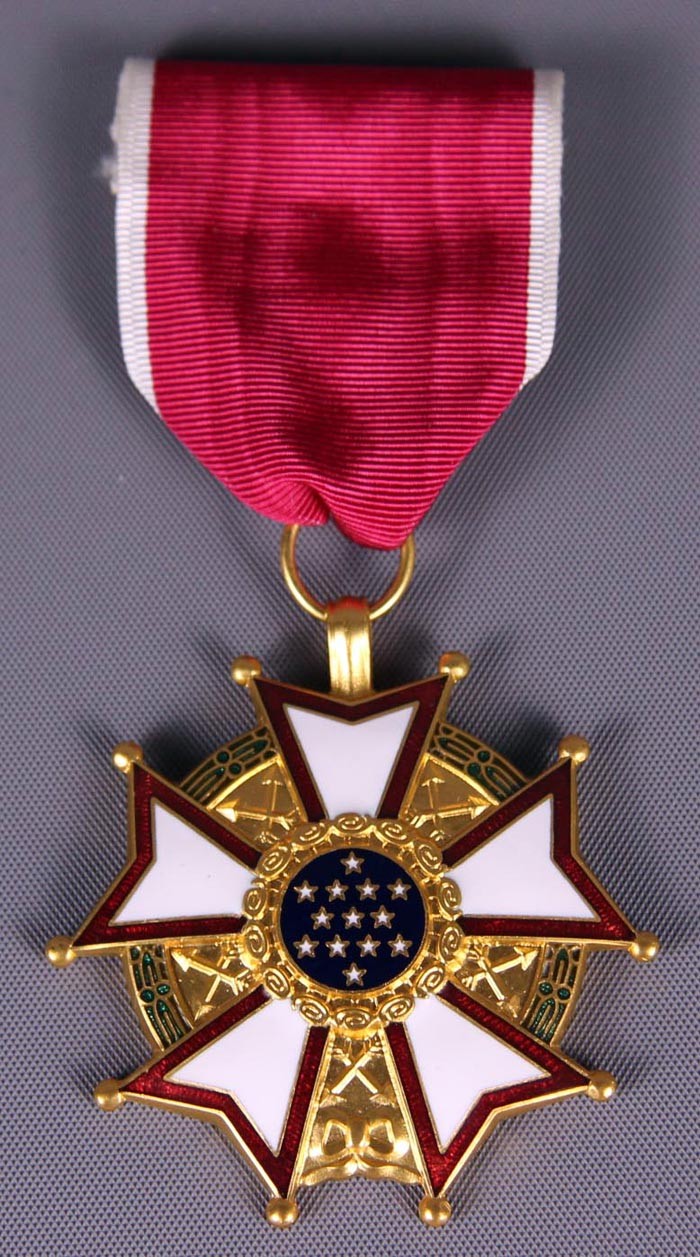 Obverse design:  Crimson suspension ribbon with one white band along the left and right edge.   A suspension ring, with the medal attached to it, has a wreath of green laurel with a gold rosette at the bottom.  In the center, a domed five-pointed whie star is bordered with crimson.   The points are reversed with V-shaped protusions.  In the center is a blue disc with thirteen stars laid out like the Great Seal of the United States.  The entire central section is surrounded by gold clouds.  Reverse design: 'UNITED STATES  OF AMERICA" is engraved around the outisde edges with "ANNUIT COEPTIS / MDCCLXXII" in the center.  This translates from Latin to "providence favors our understandings" and "1782".  A safety clasp is on the back for uniform use.  This medal was awarded to Don Walsh by President Dwight D. Eisenhower in February 1960 for "...exceptionally meritorious conduct in the performance of oustanding services and achievements." 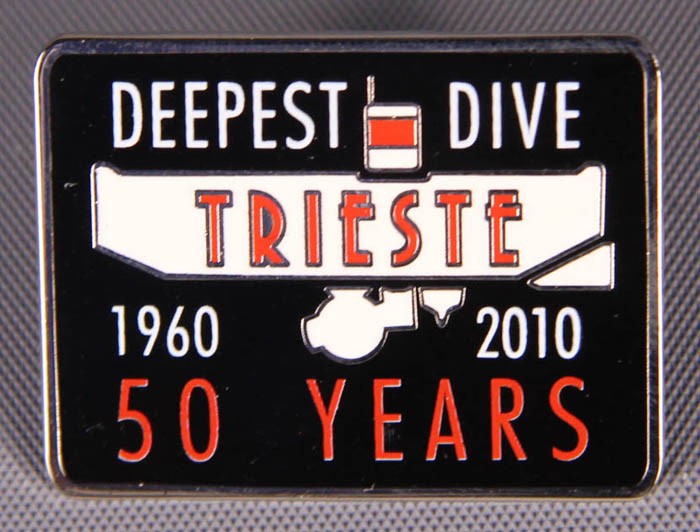 Rectangular pin celebrates fifty years since Trieste's historic dive to Challenger Deep.  The background is navy blue enamel with a white enamel bathyscaph submersible.  The submersible has red enamel with lettering that reads, "TRIESTE" and band of red near the hatch access.   The white enamel lettering reads, "DEEPEST DIVE / 1960-2010."  The red enamel lettering reads, "50 YEARS."  Don Walsh wore this commmoemoration of piloting Trieste 35,797 ft. (10,911 meters) into the deepest part of the Earth's oceans. 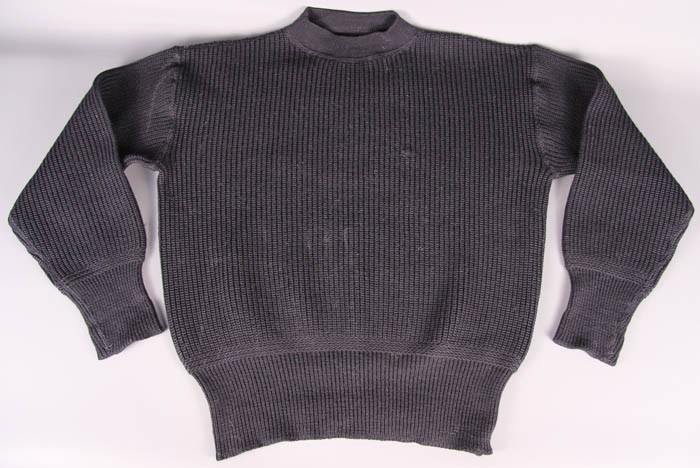 Don Walsh wore this sweater onboard Trieste during its dive down the Mariana Trench.  The submersible's sphere did not provide adequate insulation from the surrounding sea, and internal temperatures dropped to the mid-40s Farenheit (between 6 and 7 degrees Celsius) during the dive, making the sweater a welcome addition to his khaki working uniform.