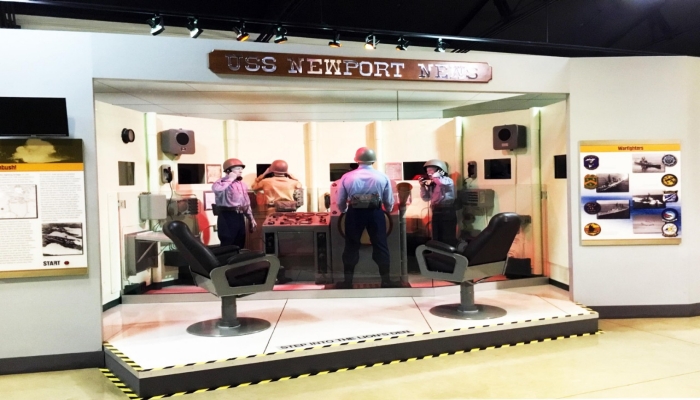 This exhibit area details the wars in Vietnam.   Fear of losing Southeast Asia to the Communist-led independence movement brought the U.S. to back the French effort during the 1950s.   French defeat resulted in a divided country, with the United States supporting the weak but pro-Western government of South Vietnam.   Assuming a more active role in 1961, the United States sent the first of 11,000 military advisors to South Vietnam and committed ground troops to combat guerilla insurgency in the south.   American strength peaked at 540,000 in 1969, and then rapidly declined.    Growing numbers of Americans opposed the war on political, or moral grounds, and public protest mounted.    The war was widely seen as futile by 1968, when peace talks opened in Paris.  The 1973 peace accord required the last U.S. Forces to withdraw, leaving the war solely to the Vietnamese.  South Vietnam did not survive long, falling in 1975 to the invading regular North Vietnamese Army.

Interesting artifacts, artwork, and models in the Vietnam War exhibit area include:

To view photographic histories of the U.S. Navy ship models in this exhibit area, please click on the model below.