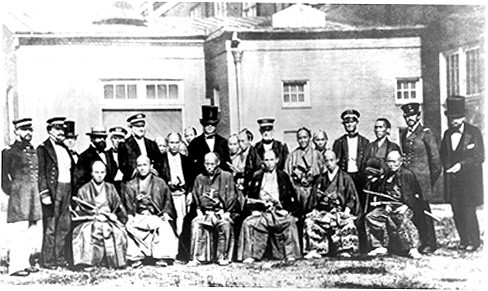 Though not an industrial country the Japanese society was complex. Arts and culture flourished in Japan under a highly structured government and class system. The Japanese lived under rules that governed every aspect of their lives according to a person's inherited status. Each level of the class system held a different responsibility and importance for the Japanese society.

Emperor- Although at the head of the class system and Japan's religious leader, the emperor had no real power. Confined to the palace grounds, he spent his time studying and writing poetry. He was spied upon and not permitted visitors without the Shogun's permission. Revered as a god, the emperor was treated as a prisoner of the Shogun.

Shogun- Shogun protected the nation against foreigners. In truth, the Shogun was the power behind the throne. He ruled the country by creating the laws and rules of conduct. As the lawmaker, the Shogun was not subject to many of these laws.

Daimyos (lords)- Daimyos were landowners and were heavily regulated by the Shogun's laws. Without his approval, a Daimyo could not marry. The number of their laborers and the size of their castles also were determined by law. They were allowed to socialize only within their own district to prevent possible plotting. They were kept from becoming too wealthy and powerful by paying for the repairs of castles, roads, and forts. When the Americans arrived there were about 250 Daimyos and 35,000 samurai working as their knights.

Samurai- Samuri were fierce warriors and also masters of farmers, artisans and merchants. Samurai enjoyed cherry blossom viewing, poetry, and flower arranging. Many were excellent poets, painters, and men of learning. A samurai depended on his Daimyo for a meager salary.

Farmers- Farmers were 80 percent of Japan's population at the time of Perry's arrival, most farmers lived below the poverty level. Their home and quality of life was determined by the amount of rice grown.

Artisans and Merchants- Although considered part of the lower class, the artisans and merchants were one of the wealthiest classes. The superb craftsmanship of artisans enabled them to accumulate a great deal of money and foodstuffs. Like the emperor, they were spied upon by the Shogun and Daimyos and had to carry out most of their trading with caution. If they appeared too luxurious, the government would confiscate their business. Merchants gradually broke out of the rules of their class as the Daimyos and samurai came to them for financial help. By the end of the 19th century merchants were becoming very powerful and may have influenced the Japanese decision to negotiate with Perry.