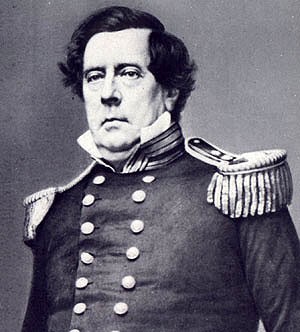 Commodore Matthew Calbraith Perry's naval career spanned nearly 50 years. A member of one of the most illustrious American naval families, young Matthew went to sea in 1809 at age 15, under the command of his older brother, Oliver Hazard Perry.

His first command was the schooner Shark that sailed to Africa as part of the Navy's efforts to stop the transatlantic slave trade. Perry gained a reputation for taking great effort to insure the health of his crew but also for enforcing strict discipline.

During the Mexican War, Perry successfully commanded the largest American naval force. Following the war, Perry devoted much of his time ashore promoting reforms for training naval officers and for expanding the Navy's use of steam power. An advocate of steam engines, Perry became known as the "father of the steam navy."

Perry's grandest accomplishment began in 1850 when he proposed a plan for diplomatic missions to Japan.

In 1853 Commodore Perry sailed on USS Mississippi, to head the expedition to Japan. He carried a letter from President Millard Fillmore to negotiate a treaty with the Japanese. Perry's diplomacy and determination made the expedition a success. Japan opened its borders, regularly, to a western nation for the first time in more than 200 years. After returning to the United States, Perry wrote a report of his expedition that was published in 1856.

Commodore Perry traveled all over the United States and the world. Use your navigation skills to plot the latitude and longitude of some of the places Perry visited.