On 25 October 1812, the frigate United States, Captain Stephen Decatur, Jr. commanding, was patrolling in the Canary Islands when it encountered HMS Macedonian, which was on a similar mission. In a 15-minute encounter, the American ship shot away the British ship's masts and the enemy ship subsequently surrendered. Decatur then took it as a prize to New York. It was the first British warship to be taken during the War of 1812. Engraving print; by J. J. Bartlett; framed dimensions 22H X 27W. Accession #: 85-229-I.

Frigate United States was commissioned on 11 July 1797 with American Revolution hero Captain John Barry in command. The ship was one of six frigates authorized by Congress with passage of the Naval Act of 1794. United States—designed by architect Joshua Humphreys and Captain Thomas Truxtun—was the first to be launched of her sister ships, Constellation, Constitution, Congress, President, and Chesapeake. Upon fitting, United States was ordered to sea in the spring of 1798 in company with Delaware, a former merchant ship that had been reconfigured for U.S. naval service. The two ships set course for Boston, where they were to be joined by 20-gun ship Herald and the cutter Pickering, but the ships would not be ready to set sail for several weeks. Barry decided the need for U.S. naval presence in the Caribbean was too great for him to wait, so United States and Delaware departed Boston on 26 July headed for Barbados. Over the course of the voyage, the frigate hunted French vessels making quarry of the 10-gun privateer Sans Pareil and taking eight-gun privateer Jalouse as a prize. She returned to American waters when she entered the Delaware on 18 September.

After nearly a month in port, United States was ordered to cruise between the New England and New Jersey coasts, but heavy seas during the voyage forced the ship south off North Carolina. The ship made way back to Delaware at the end of October needing significant repairs. After more than a month, she set sail again for the West Indies where Barry was to command the American Squadron. On the morning of 3 February 1799, United States spotted a foreign sail near Martinique and gave chase. After nearly five hours of pursuit, United States opened fire on the fleeing vessel sending a round that went through L'Amour de la Patrie, a six-gun privateer, from stern to stem. United States rescued the sinking ship’s 58 survivors and took them prisoner. About two weeks later, United States arrived in enemy waters to negotiate a prisoner exchange, but were met by shore batteries. Six days later, under a flag of truce, Barry successfully arranged the exchange of an equal number of American Sailors, who were also being held as prisoners. On 26 February, the crew of United States sighted two unknown vessels east of Marie Galente and made chase overtaking one—the 430-ton Cicero that had been seized by French privateer Democrat. After putting a prize crew on Cicero, United States resumed pursuit of Democrat, but the enemy vessel escaped into the darkness of night. Meanwhile, more commissioned U.S. Navy ships began arriving in the Caribbean, and by mid-March, Barry’s squadron consisted of two frigates, three ships, and four revenue cutters. On 26 March, United States took French privateer schooner La Tartueffe and its prize American sloop Vermont southeast of Antigua. On 19 April, Barry turned over command of the squadron to Truxtun and made way back to American waters arriving in New Castle, Delaware, on 10 May.

After nearly two months in home waters, United States was underway down the U.S. east coast, but an unexpected storm damaged the ship. She anchored off Hampton Roads, Virginia, on 22 July for repairs. After receiving a new bowsprit, the frigate was underway about three weeks later in company with Insurgent. Sometime during the voyage, the ships were separated, so United States anchored off Newport, Rhode Island, awaiting further instructions. On 2 November, United States sailed for France, with commissioners appointed by President John Adams, to negotiate a settlement between the two countries. She returned to New York in April 1800 and was laid up for some time to repair damages she undertook battling a severe storm in the Bay of Biscay. She set sail in the fall of that year for the Caribbean, but was recalled because of the peace treaty signed with France. On the last day of Adams’ administration, he authorized his successor, Thomas Jefferson, to dispose of all naval vessels except the frigates. United States proceeded to the Washington Navy Yard where she was decommissioned on 6 June 1801. United States remained in the Potomac until 1809 when she received orders to ready herself for active service.

On 10 June 1810, United States made way to Norfolk, Virginia, for refitting under the command of Captain Stephen Decatur, Jr. While at Norfolk, British Captain John S. Garden of the frigate HMS Macedonian wagered that if the ships ever meet, his vessel would take United States in battle. It would not be long until the rival captain’s bet would become reality. On 19 June 1812, the United States declared war on Great Britain. After patrolling off the U.S. east coast in August and October with Congress and Argus, United States parted ways with the squadron to cruise eastward. On 25 October, 500 miles south of the Azores, lookouts spotted a ship over the horizon. Decatur quickly realized it was his nemesis—Garden’s Macedonian.

Both ships immediately prepared for battle. Garden’s plan was to move closer on a parallel course with the American frigate, while Decatur intended to engage Macedonian at longer range where his 24-pounders would have the advantage over the British ship’s 18-pounders. The battle developed more to Decatur’s plan. The action began when United States fired broadside, but the initial attack was inaccurate. Macedonian countered bringing down a small spar on United States. Decatur’s next broadside attack had much better luck destroying Macedonian’s top mast. Next, United States took up position off Macedonian’s quarter riddling the British ship with gunfire. By noon, Macedonian was forced to surrender. She suffered 104 casualties, compared to United States, who suffered only 12. The American ship emerged from the battle relatively unscathed.

At the conclusion of the war, United States patrolled in the Mediterranean as a show of force to remind Barbary rulers of the treaty they signed with the United States in 1815. The ship continued to serve in the region for years. From 1824–1827, United States deployed with the Pacific Squadron under the command of Isaac Hull, where her role was to protect American shipping and commercial interests. In 1828, United States was sent to the Philadelphia Navy Yard for extensive repairs and remained there until 1830 when she was placed in ordinary at the New York Navy Yard. She remained in New York until 1832 where she was thoroughly modernized. She served in Mediterranean waters from 1833–1838 and deployed with the Home Squadron in 1839 and 1840.

After repairs at Norfolk, United States was designated in January 1842 as the new flagship of the Pacific Squadron. Of note, while the frigate was serving in the Pacific, Herman Melville, who would later author Moby Dick, enlisted on 17 August 1843 as an ordinary seaman onboard United States. The ship was decommissioned in 1844, but was recommissioned in May 1846 to suppress illicit slave trade with the African Squadron. She returned to Norfolk in 1848 and was decommissioned the following year. The Confederates captured her when they seized the Norfolk Navy Yard in 1861. The Confederate Navy commissioned her as CSS United States, though she was often referred to as Confederate States. She surprisingly served well for her new owners before she was ordered sunk in the Elizabeth River to form an obstruction against Union vessels when the Confederates abandoned Norfolk in May 1862. Shortly after the Civil War was over, United States was raised and towed back to Norfolk. The gallant old frigate remained there until 1865 after it was decided to break her up and sell her wood. 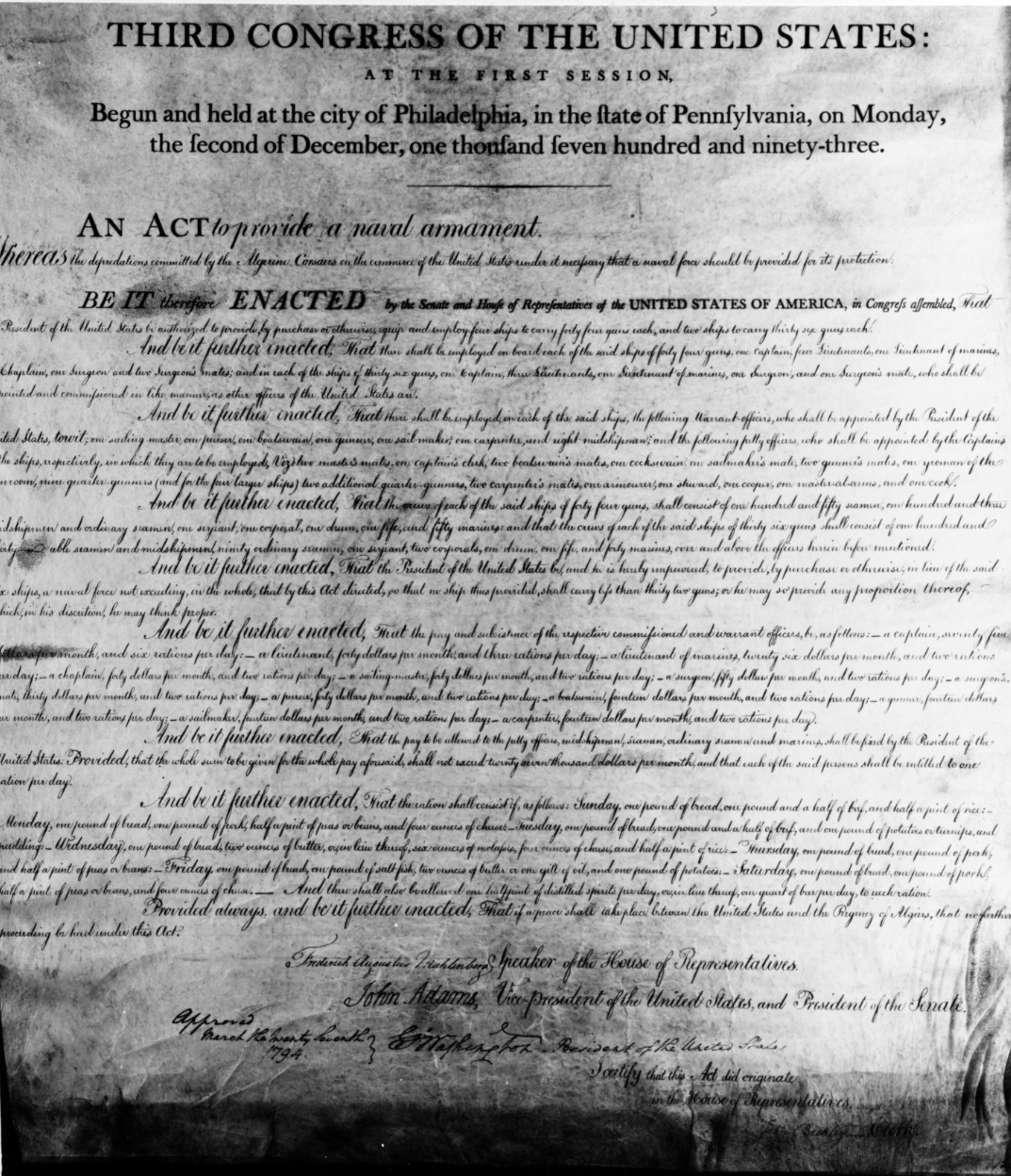 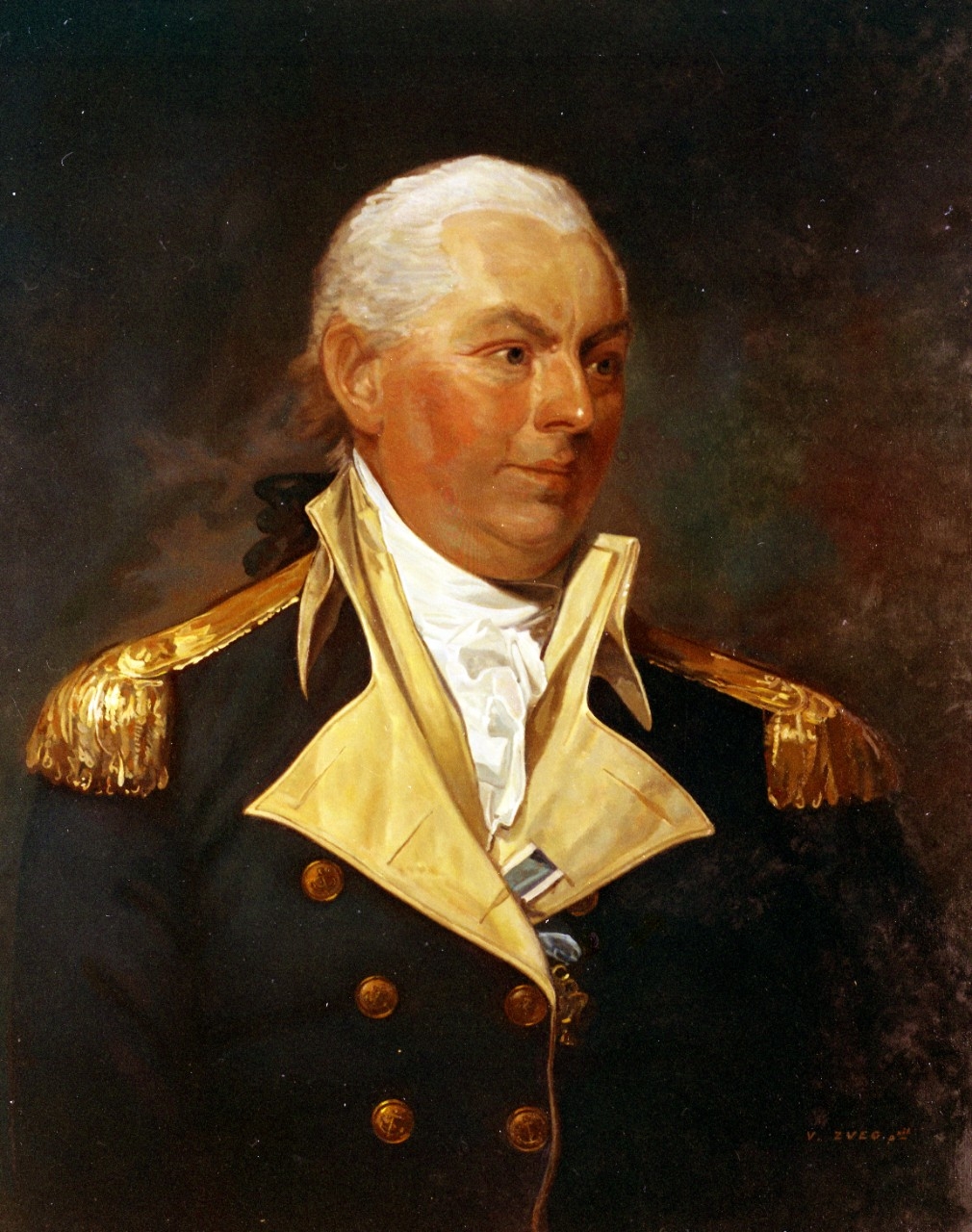 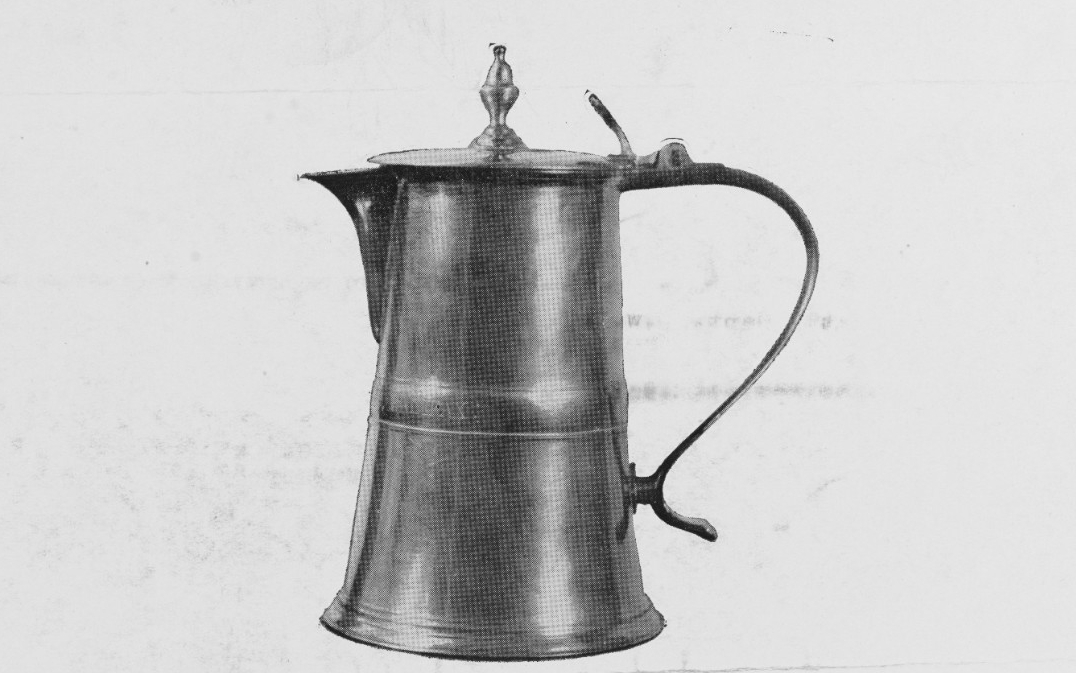 A flagon that is believed to have been presented by Congress to the frigate United States. National Archives photograph, USN 901340.

Captain John Barry’s commission as a captain in the United States Navy, to command the frigate United States, signed by President George Washington on 22 February 1797. It provided an effective date of 4 June 1794 for Barry's rank as captain. U.S. Naval History and Heritage Command photograph, NH 56855. 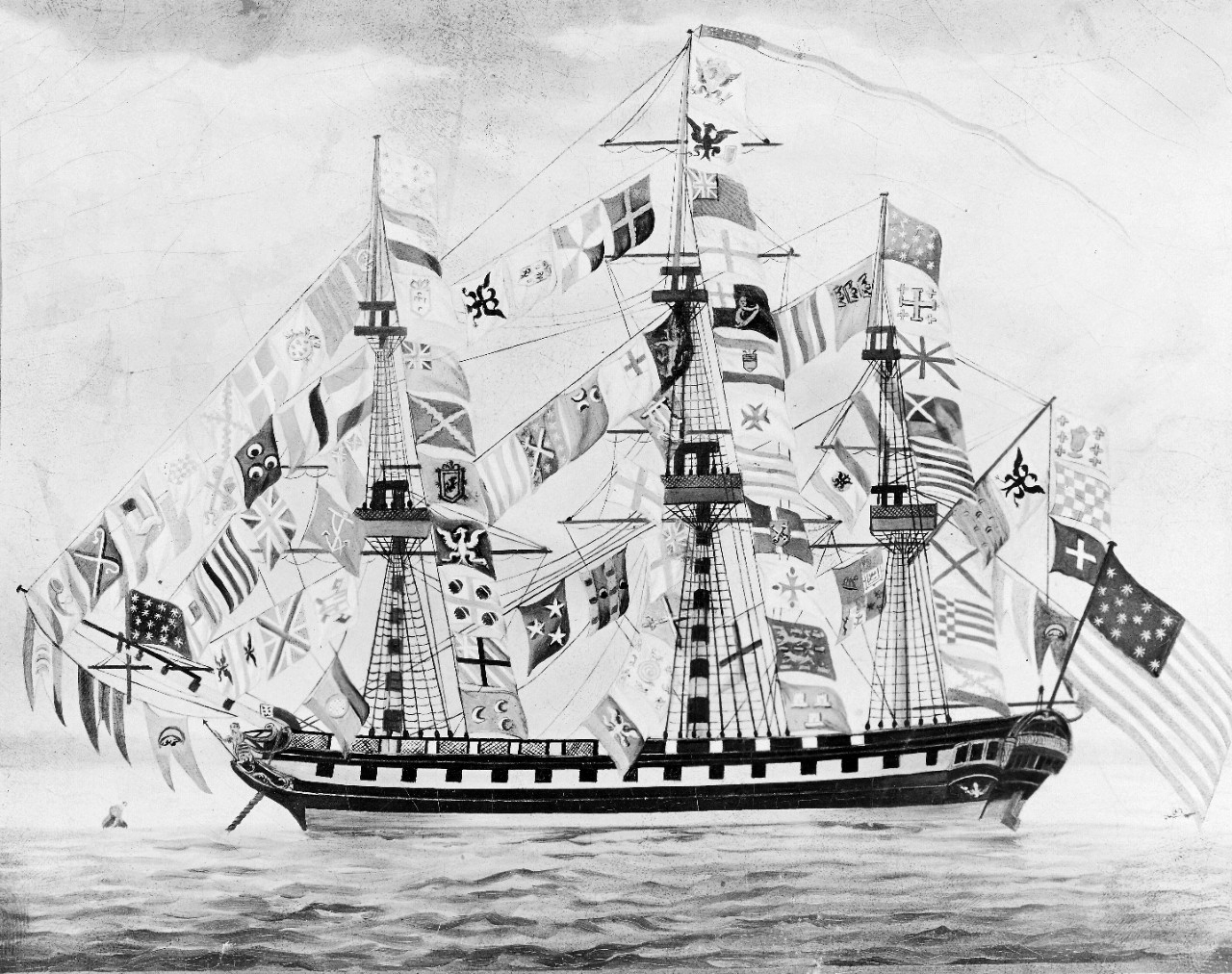 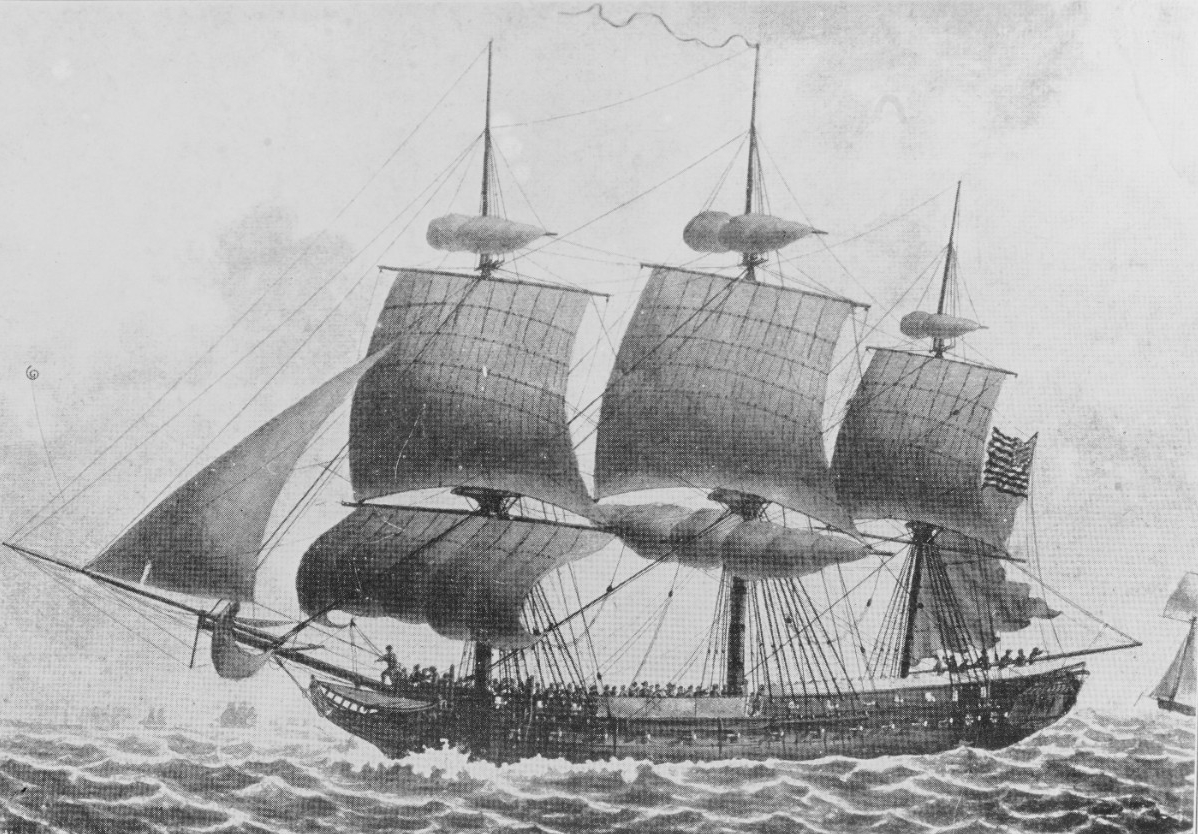 Painting by Antoine Roux of frigate United States that was built in 1799. Naval History and Heritage Command photograph, NH 595. 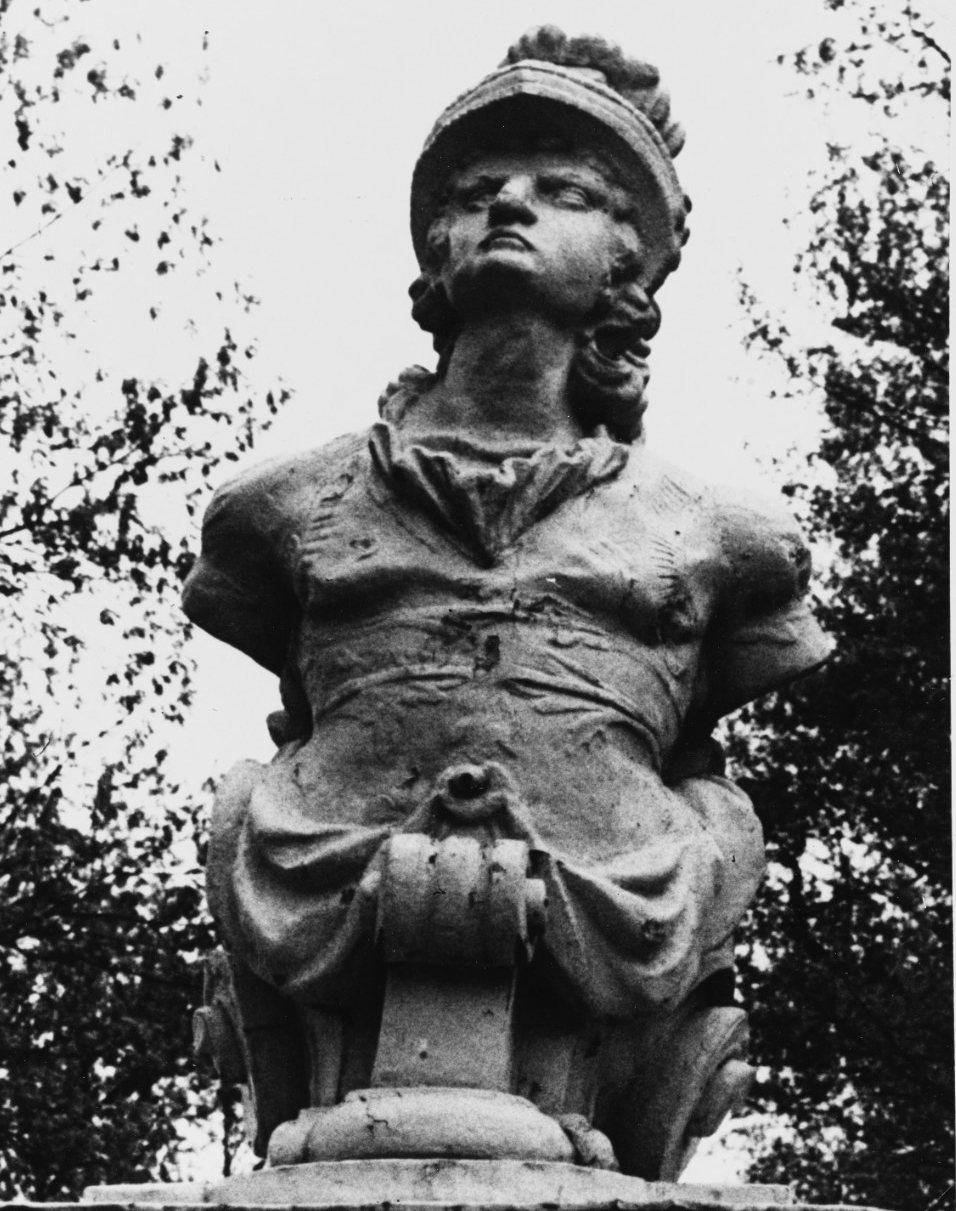 Figurehead of Minerva from the HMS frigate Macedonian. The U.S. frigate United States captured Macedonian on 25 October 1812. The figurehead is on display at the U.S. Naval Academy in Annapolis, Maryland. Naval History and Heritage Command photograph, NH 115249.