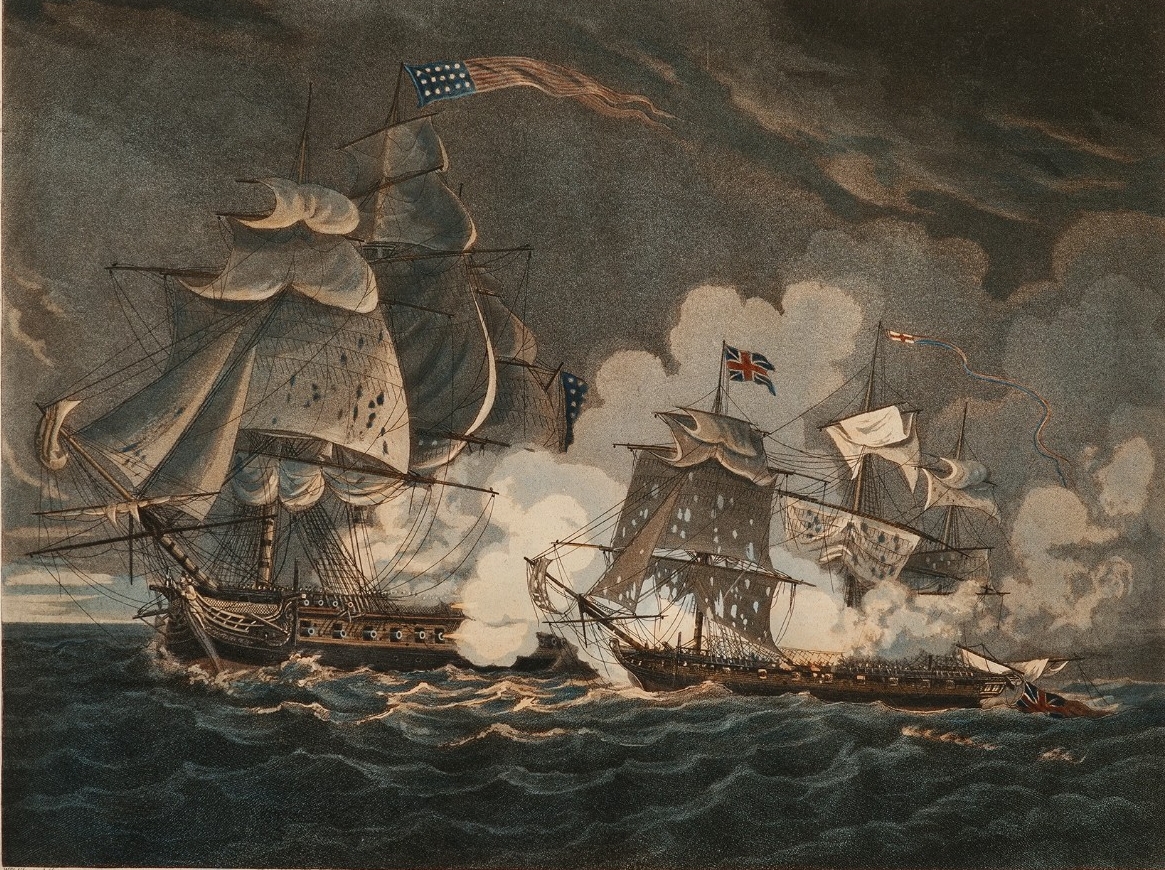 Frigate President was launched on 10 April 1800 under the command of Captain Thomas Truxtun. The ship was one of six frigates authorized by Congress with passage of the Naval Act of 1794. President, built by naval constructor Christian Bergh at East River, New York, set sail on her maiden voyage on 5 August 1800 for the Mediterranean, where she served as flagship for Commodore Richard Dale in 1801–1802. She also cruised in the Mediterranean in 1804–1805 participating in actions against Tripoli.

President cruised off the eastern coast of the United States from 1809–1812, where she took 11 merchant ships and the British Navy schooner High Flyer. In April 1811, with Commodore John Rodgers in command, President, in company with frigate Congress, slipped out of Boston Harbor to patrol British trade routes in the North Atlantic. On the evening of 11 May, President exchanged several shots with British ship Little Belt. Although each of the ship’s commanders claimed the other fired first, the incident increased tensions between Britain and the United States. For the British public, it was an insult as great for the American public as was the HMS Leopard versus frigate Chesapeake incident that took place in 1807. President sustained only one injury while Little Belt took nine deaths during the battle and sustained 23 injuries. Two of the wounded Britons died the following day. The British sloop was badly damaged during the engagement.

Upon commencement of the War of 1812, President set sail from New York on 21 June 1812 in company with United States, Congress, Hornet, and Argus on a cruise in the North Atlantic. Two days later, the squadron heard the homeward bound West India Fleet was steering east, and they directed course accordingly. At about 6 a.m., they gained sight of British frigate HMS Belvidera standing toward the American squadron. At 11:30 a.m., Belvidera hoisted her colors, as did the American ships. At 4:20 p.m., President commenced firing her bow guns with three shots taking effect in Belvidera’s counter and the fourth struck the muzzle of the ship’s chase gun. Five minutes later, Belvidera opened fire on President and, shortly afterward, one of President’s guns exploded, killing or wounding 16 people, including Rodgers whose leg was broken. It was evident that President was able to run alongside the enemy ship, so the British commander cut away all her anchors except her best bower. At 6:30 p.m., Congress commenced firing, but her shots fell short. To escape the American ships, Belvidera’s yawl, barge, gig, and jolly boats were thrown overboard or cut away. By 8 p.m., the pursuing frigates had dropped two miles behind, and by 11:25 p.m., they were three miles behind. The commanders of the American frigates decided to end the pursuit and rejoin their consorts. President later returned to Boston for refitting.

On 3 October 1812, President set sail from Boston for the North Atlantic. On 31 October, United States frigates President and Congress spotted British 36-gun frigate HMS Galatea. As the British ship came closer, the two American frigates displayed their colors. At about noon, President tacked, as if to get into the wake of Galatea, who was afraid she would come between the two American ships. The British ship was relieved when Congress also tacked. Galatea eventually escaped and, being 93 men short of her complement, could scarcely have resisted the attack of the American frigates. President returned to Boston at the end of the year.

On 30 April 1813, President hoisted her sails for a cruise off the European coast. During the voyage, on 23 September, she captured British schooner Highflyer. She later sailed to the West Indies, returning to New York in February 1814. While there, President was blockaded by the powerful British Navy for nearly a year. President attempted to escape the blockade with Commodore Stephen Decatur, Jr., in command, but was captured off the coast of New York by British ships Endymion, Majestic, Pomone, and Tenedos. Decatur and the crew were made prisoners and taken to Bermuda. The Royal Navy took the American frigate into service as HMS President until the gallant ship was broken up in 1817 at Portsmouth, England. 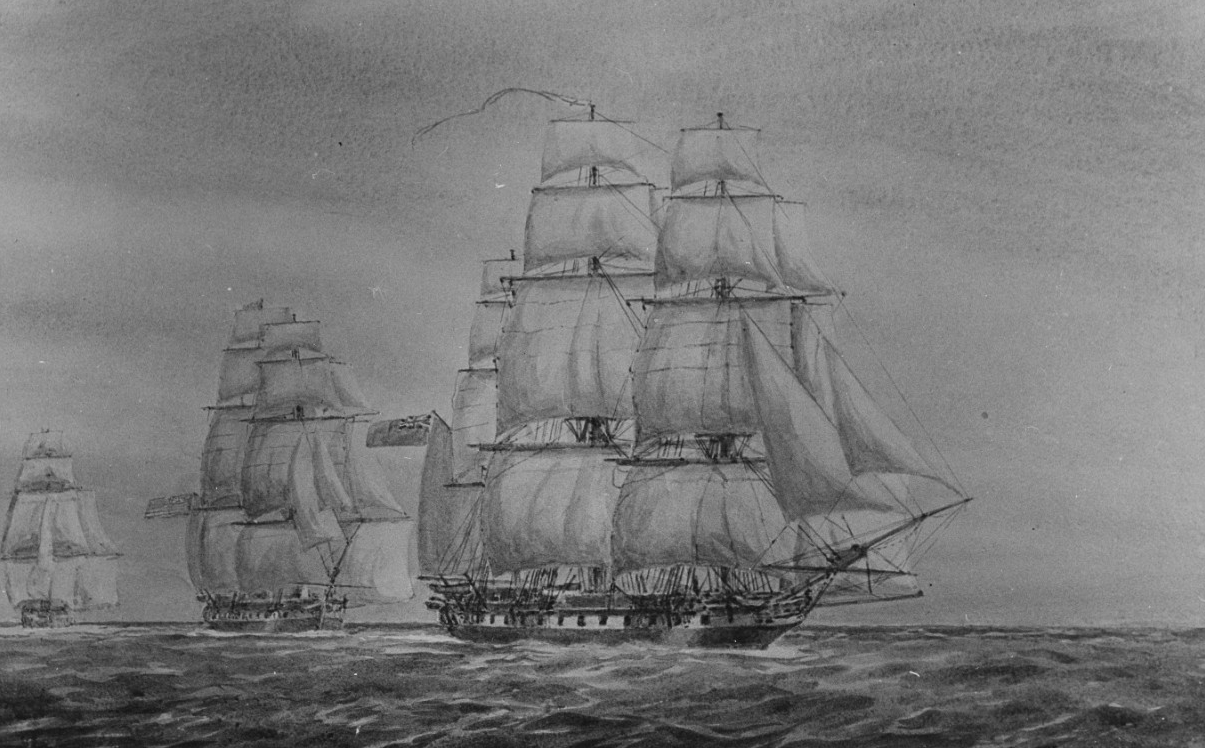 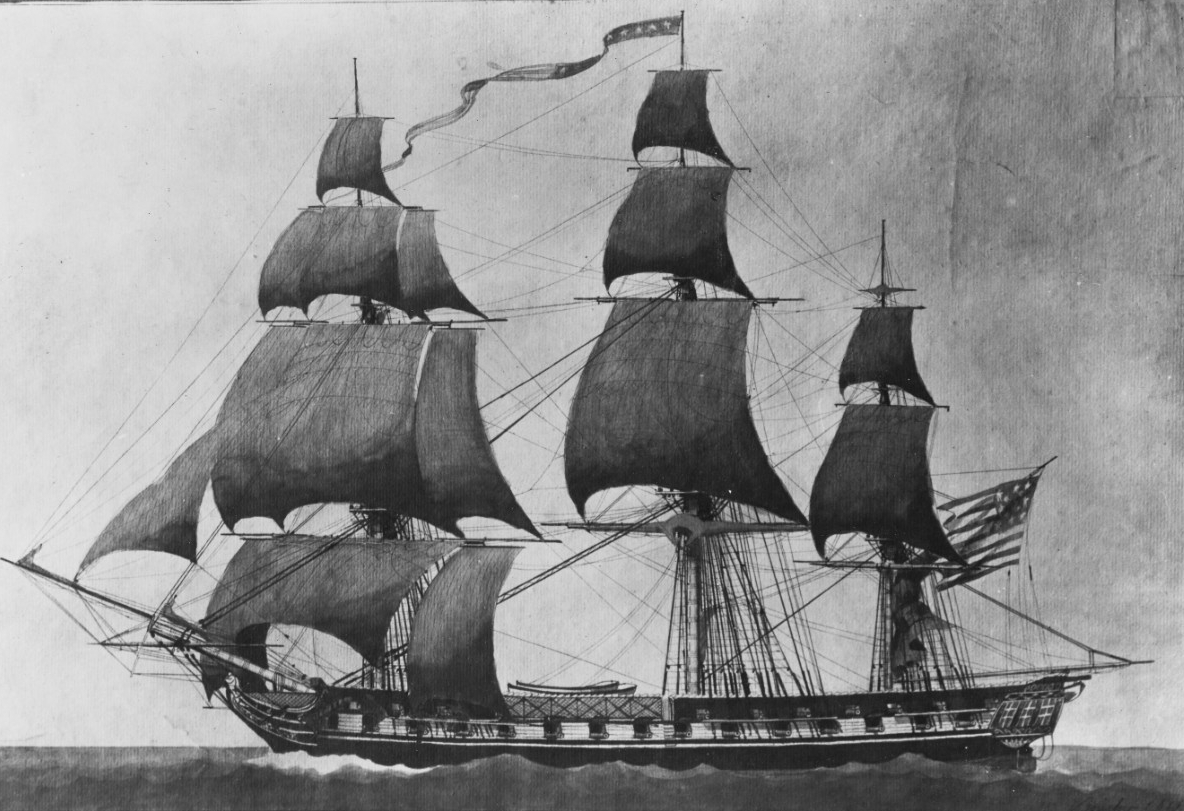 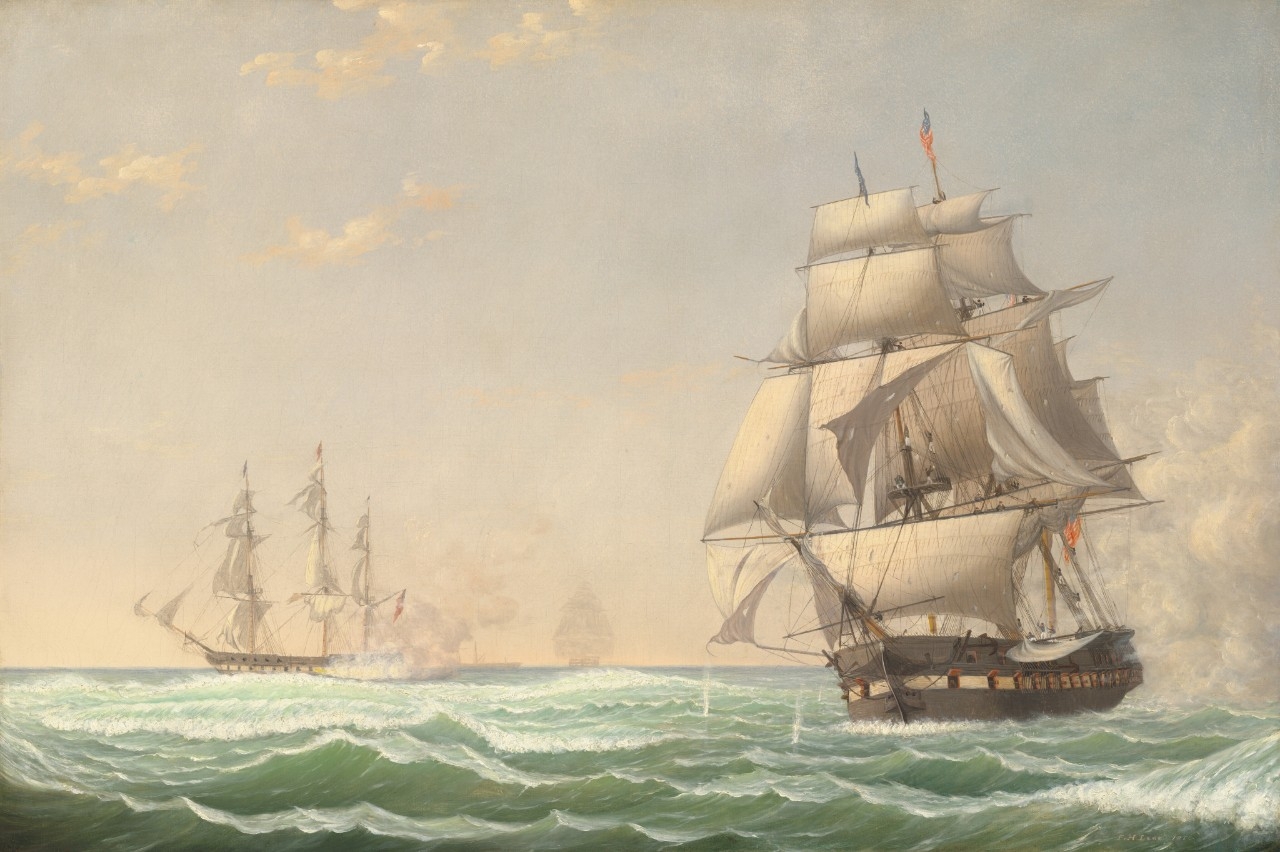 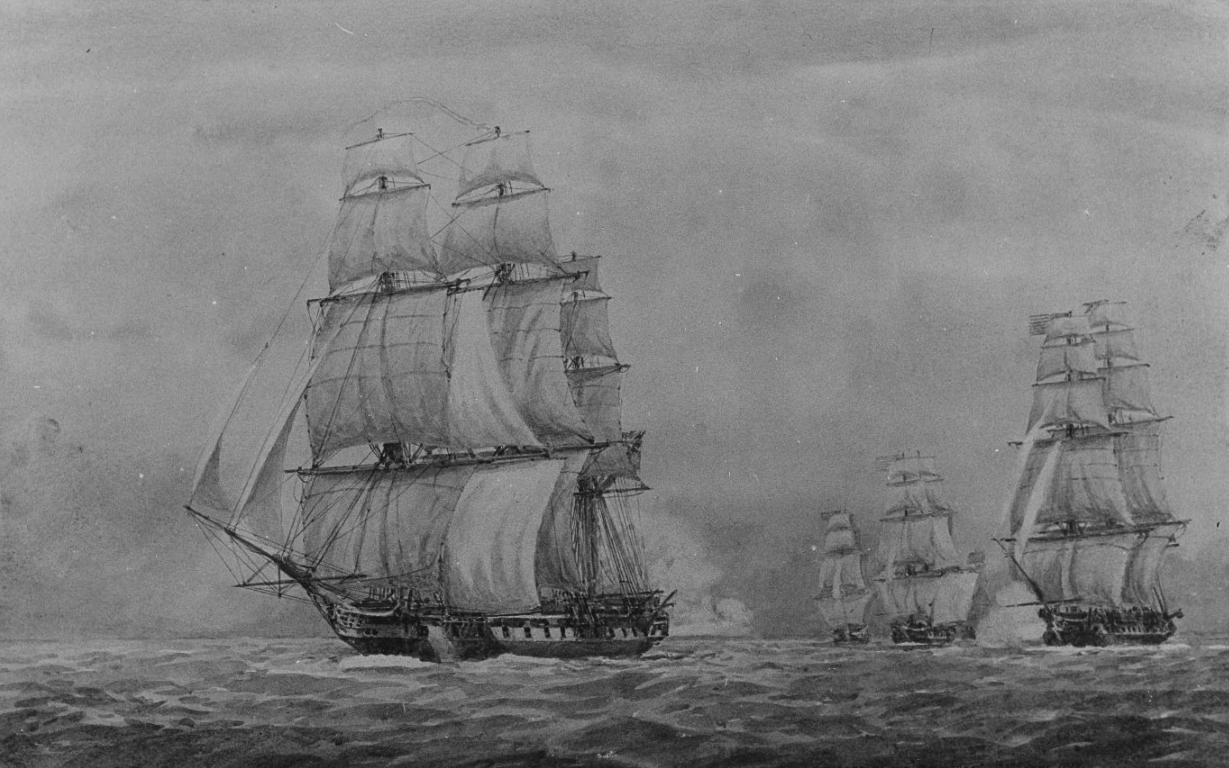 Sail plan of frigate President during the War of 1812. Reproduced from, The History of the American Sailing Navy by Howard I. Chapelle. Naval History and Heritage Command photograph, NH 108181. 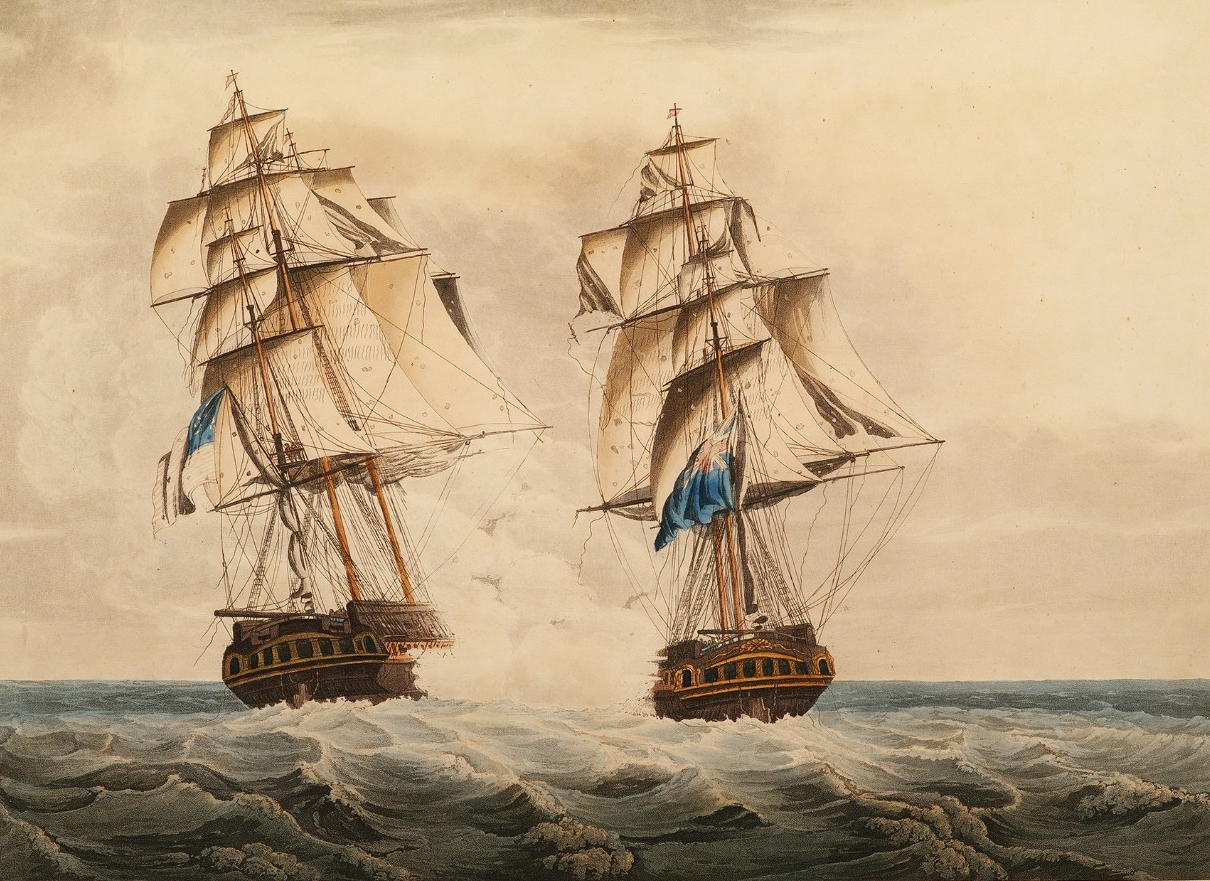