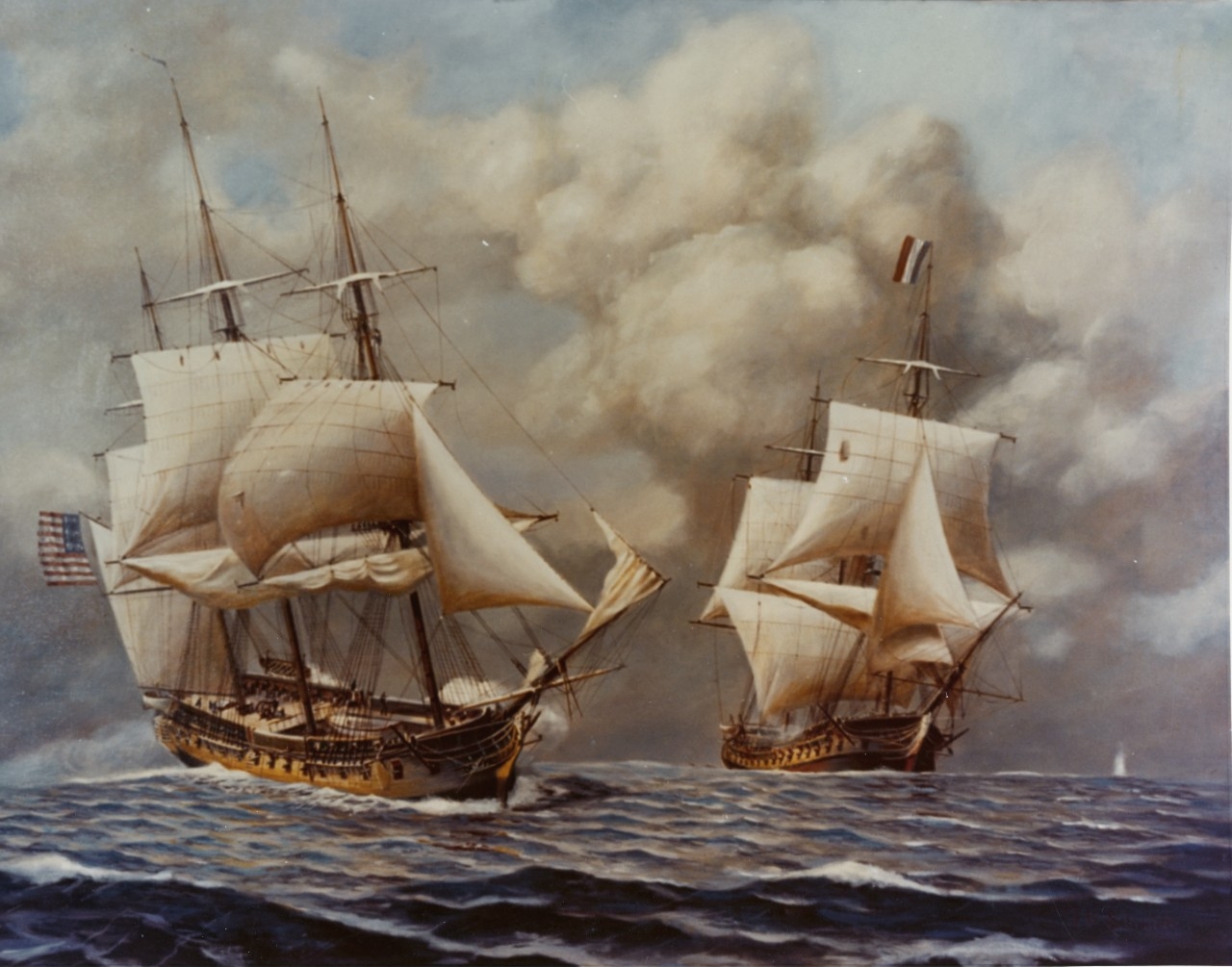 Frigate Constellation—designed by naval constructors Joshua Humphreys and Josiah Fox whose plans were altered in the execution by builder David Stodder and superintendent of shipbuilding Captain Thomas Truxtun—was constructed at the Sterrett Shipyard in Baltimore, Maryland. She was launched on 7 September 1797. The ship was one of six frigates authorized by Congress with passage of the Naval Act of 1794. Under the command of Truxtun, Constellation set sail for the Caribbean and subsequently the West Indies to protect U.S. commerce. On 9 February 1799, the ship spotted French 40-gun frigate L’Insurgente off Nevis. In a hard fought battle that lasted a little more than hour, Constellation defeated the French ship and took her as a prize. In the following months, Constellation also seized French privateers Diligent and Union. On 1 February 1800, the American frigate engaged 52-gun frigate L’Vengeance in a lengthy, furious battle. Although the French ship twice struck her colors and nearly sank, she managed to escape under the cover of darkness. In the ensuing months, success continued for Constellation when in May she recaptured three American merchantmen. At the conclusion of the Quasi War with France, the ship set sail for home waters, but misfortune awaited the gallant ship. While anchored in Delaware Bay on 10 April 1801, the ship was caught in heavy seas that laid her over on beam ends. After she was recovered, Constellation underwent extensive repairs.

In May 1802, Constellation sailed with the squadron of Commodore Robert Morris, and later with Commodores Samuel Barron and John Rodgers, participating in the blockade of Tripoli. She cruised extensively in Mediterranean waters to show the flag in demonstration of United States seapower, and in June, evacuated a contingent of U.S. Marines, as well as diplomats, from Derne at the conclusion of fleet-shore operations against Tripoli. After peace terms were finalized, Constellation returned to the United States arriving in Washington, D.C., in November 1805 where she was placed in ordinary until 1812.

With the advent of war with England, Constellation, under the command of Captain Charles Stewart, set sail for Hampton Roads, Virginia. Shortly after arrival in January 1813, she was effectively blockaded by the powerful British fleet. Although she was unable to reach the open sea, Constellation’s presence helped protect fortifications at Craney Island. In the aftermath of the War of 1812, Barbary powers had enriched themselves considerably during America’s struggle with Britain. On 20 May 1815, Constellation—attached to the Mediterranean Squadron under Commodore Stephen Decatur, Jr.—sailed from New York and joined in the capture of Algerian frigate Mashuda on 17 June 1815. Soon after peace treaties ensued with Algiers, Tunis, and Tripoli. Constellation remained with the squadron to enforce the accords, returning to Hampton Roads in December 1817.

Except for brief periods of repair work, Constellation’s career through the mid-19th century was wide-ranging and colorful. From late 1819 through April of the next year, Constellation served as flagship for Commodore Charles Morris on the Brazil Station, where they protected American interests against privateers and also helped negotiate trade agreements with South American countries. On 25 July 1820, Constellation, for the first time, set sail for Pacific waters, where she remained for the next two years protecting American shipping off the coast of Peru. In 1827, Constellation served briefly as flagship of the West India Squadron whose mission was the eradication of pirates and the interception of slavers. In August 1829, Constellation cruised to the Mediterranean where she stood watch over American shipping and collected indemnities from previous losses suffered by U.S. merchantmen. The ship returned to the United States in November 1831, and underwent repairs before she set sail again for the Mediterranean remaining there until November 1834. She was forced to return to the United States due to an outbreak of cholera among the crew. In October 1835, Constellation hoisted her sails for the Gulf of Mexico to assist with the Seminole uprising. She landed shore parties to relieve the Army and sent her boats on amphibious expeditions.

During the 1840s, Constellation circumnavigated the globe and served on the East India Squadron where her mission was to safeguard American lives and property against loss during the Opium War, and further, to enable negotiation of commercial treaties. In May 1843, while enroute to homeport, she made way to the Hawaiian Islands to protect them from becoming a British province, and thereafter, made port calls to several South American destinations. Constellation was ultimately laid up in ordinary at Norfolk for more than a decade before the gallant old frigate was broken up in 1853. 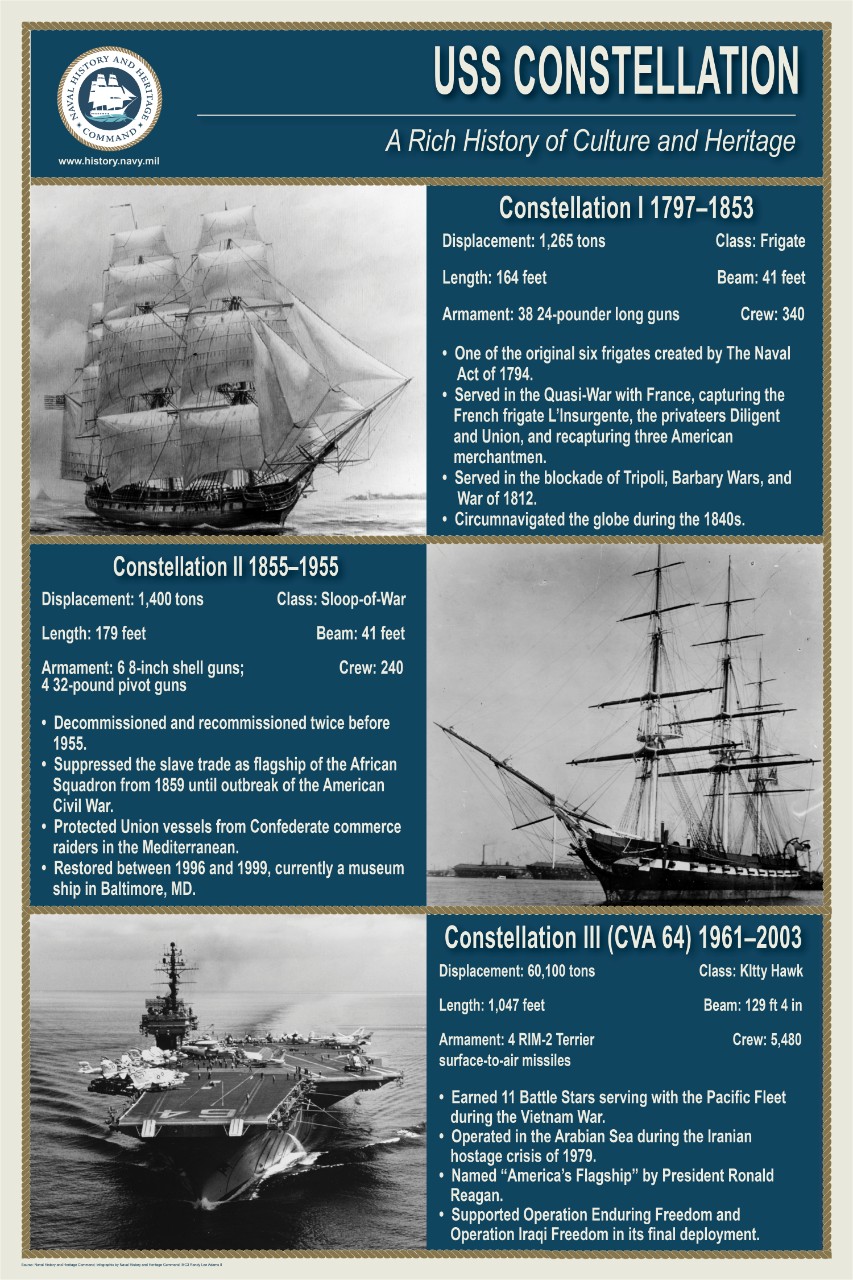 Frigate Constellation chasing the French ship L’Insurgente, 9 February 1799. The capture of the French frigate off the island of Nevis was the most notable events of the Quasi War with France. Painted, engraved, and published by E. Savage. Naval History and Heritage Command photograph, NH 56893. 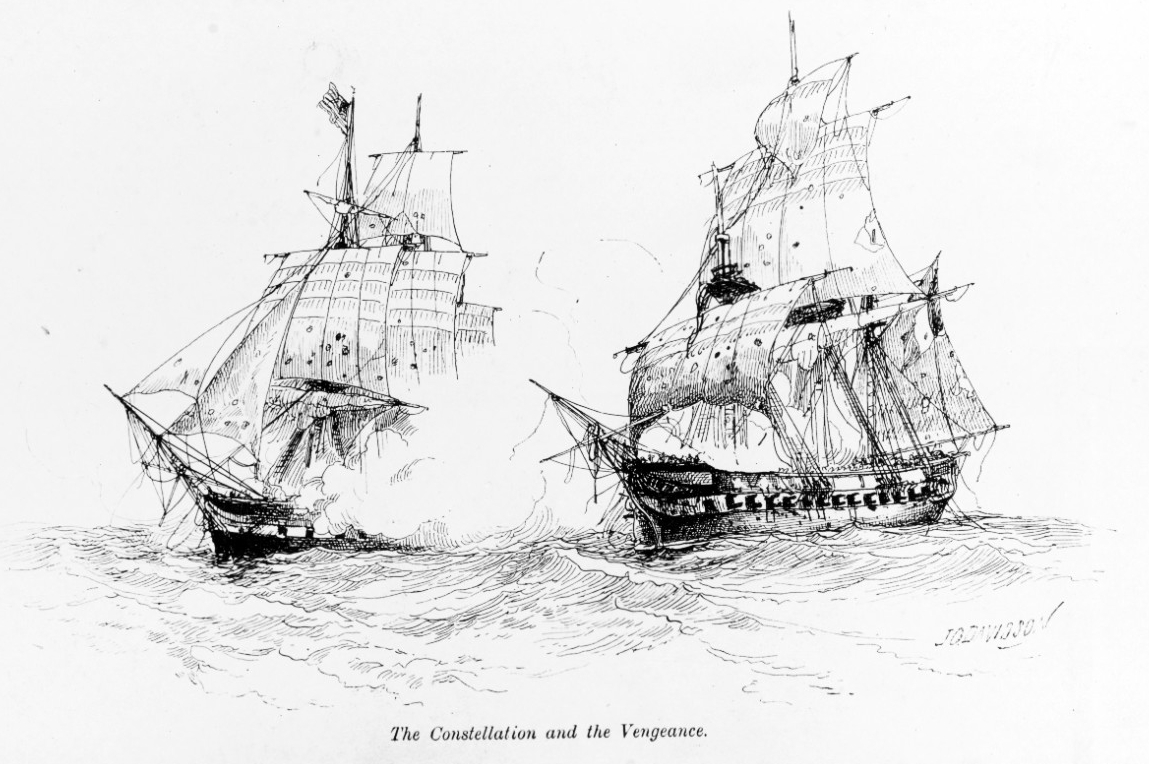 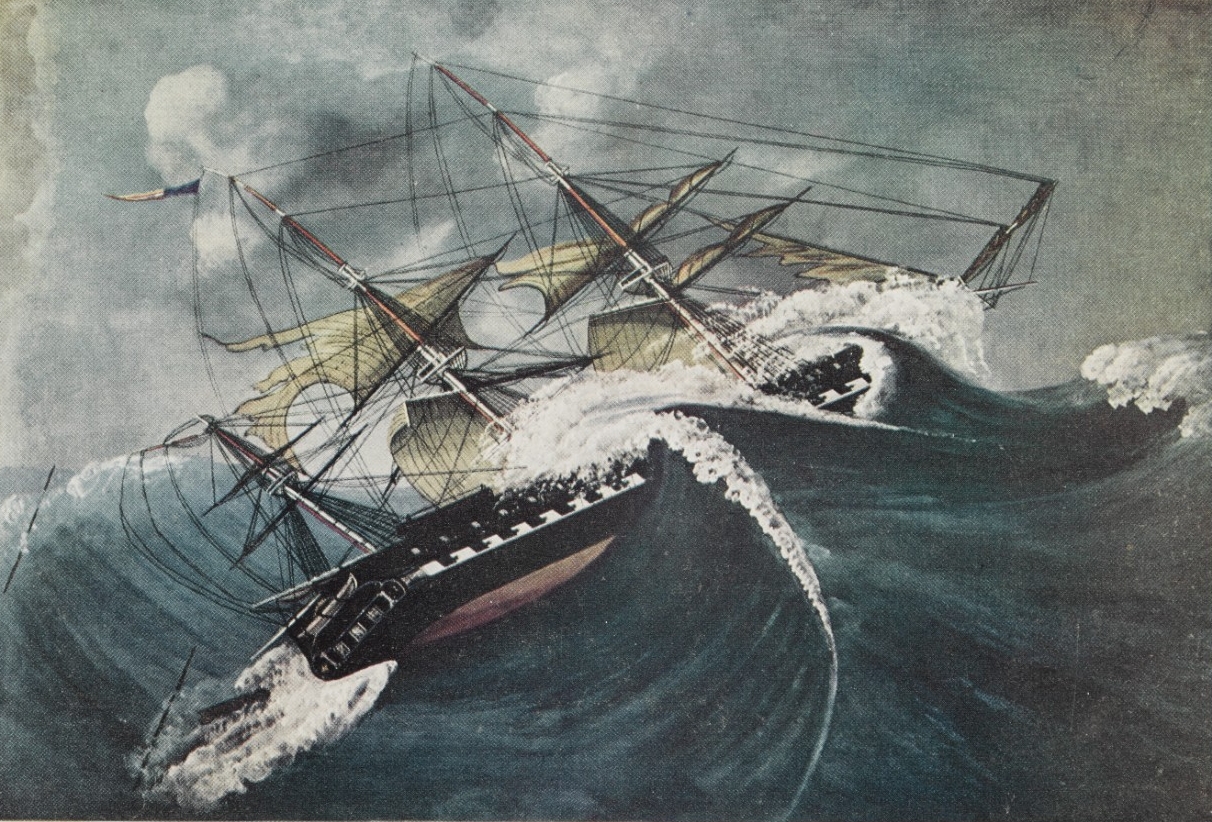 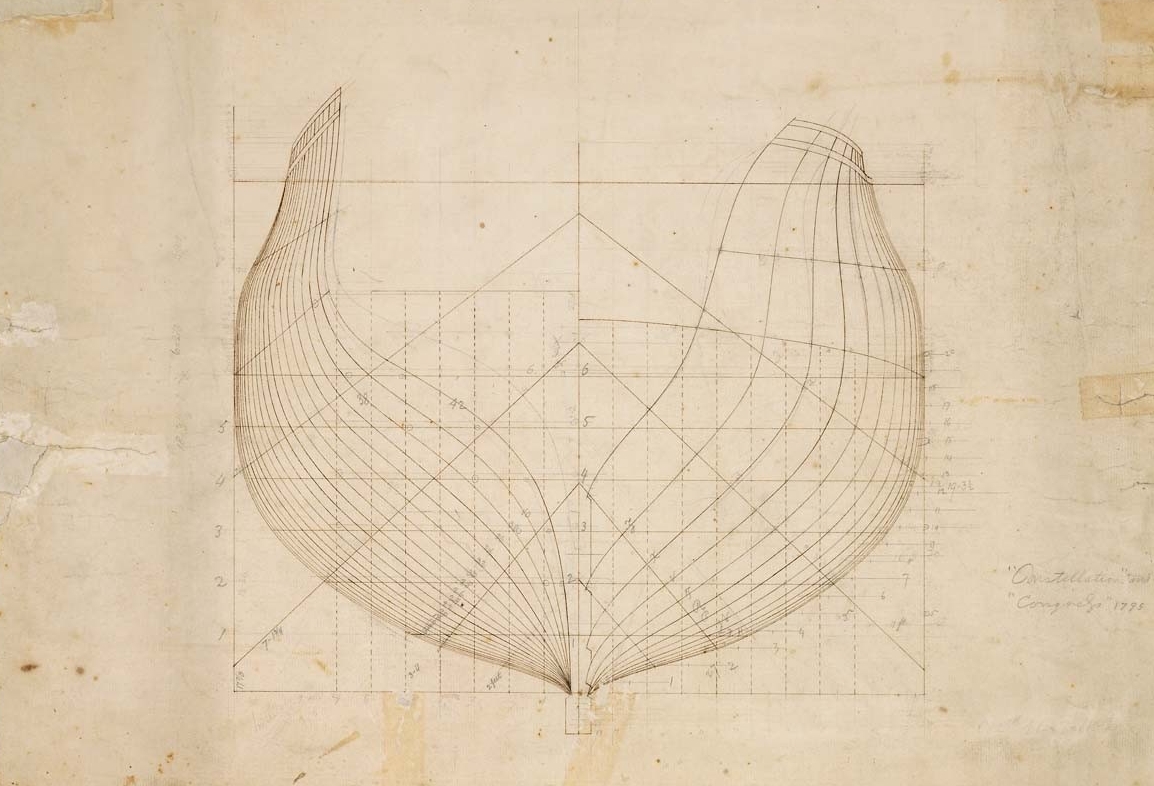 Drawing of the hulls of frigates Constitution and Constellation. National Archives identifier, 783888. Print shows the aftermath of a battle between the frigate Constellation and the French frigate L’Insurgente with the crew of the Constellation gathered on the starboard side cheering as the badly damaged L’Insurgente surrendered. Library of Congress photograph, 2015650320.

Back view of silver urn presented to Captain Thomas Truxtun by Lloyd's of London in 1800 for his victory as commanding officer of the U.S. frigate Constellation over the French frigate L’Insurgente, 9 February 1799. Naval History and Heritage Command photograph, NH 119315. 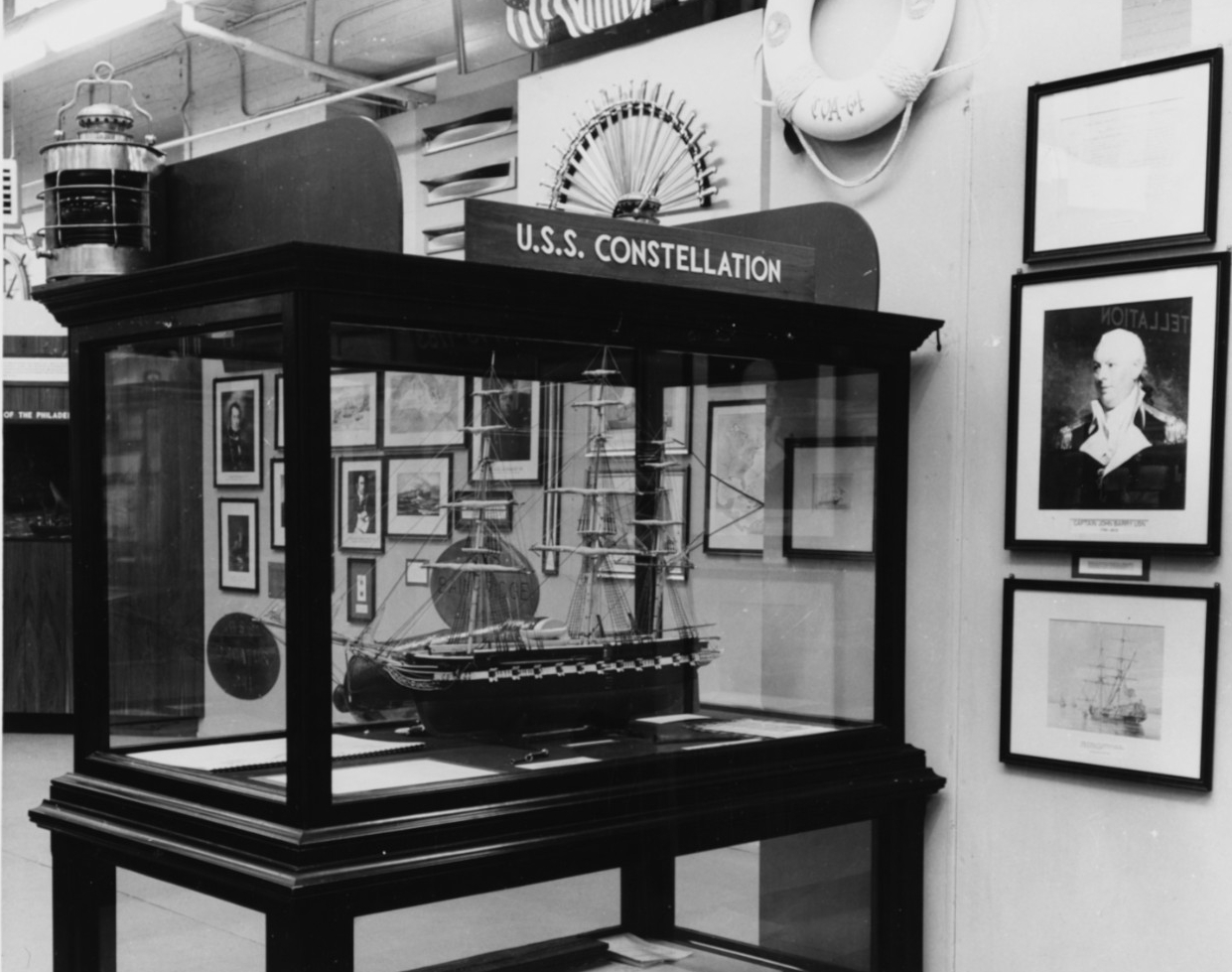 Model of the U.S. frigate Constellation, built in 1797, which saw action in the Quasi War with France, Barbary Wars, War of 1812, and served afloat in later wars. Display was at Naval Historical Display Center, Washington, DC, in 1966. Naval History and Heritage Command photograph, NH 114622.