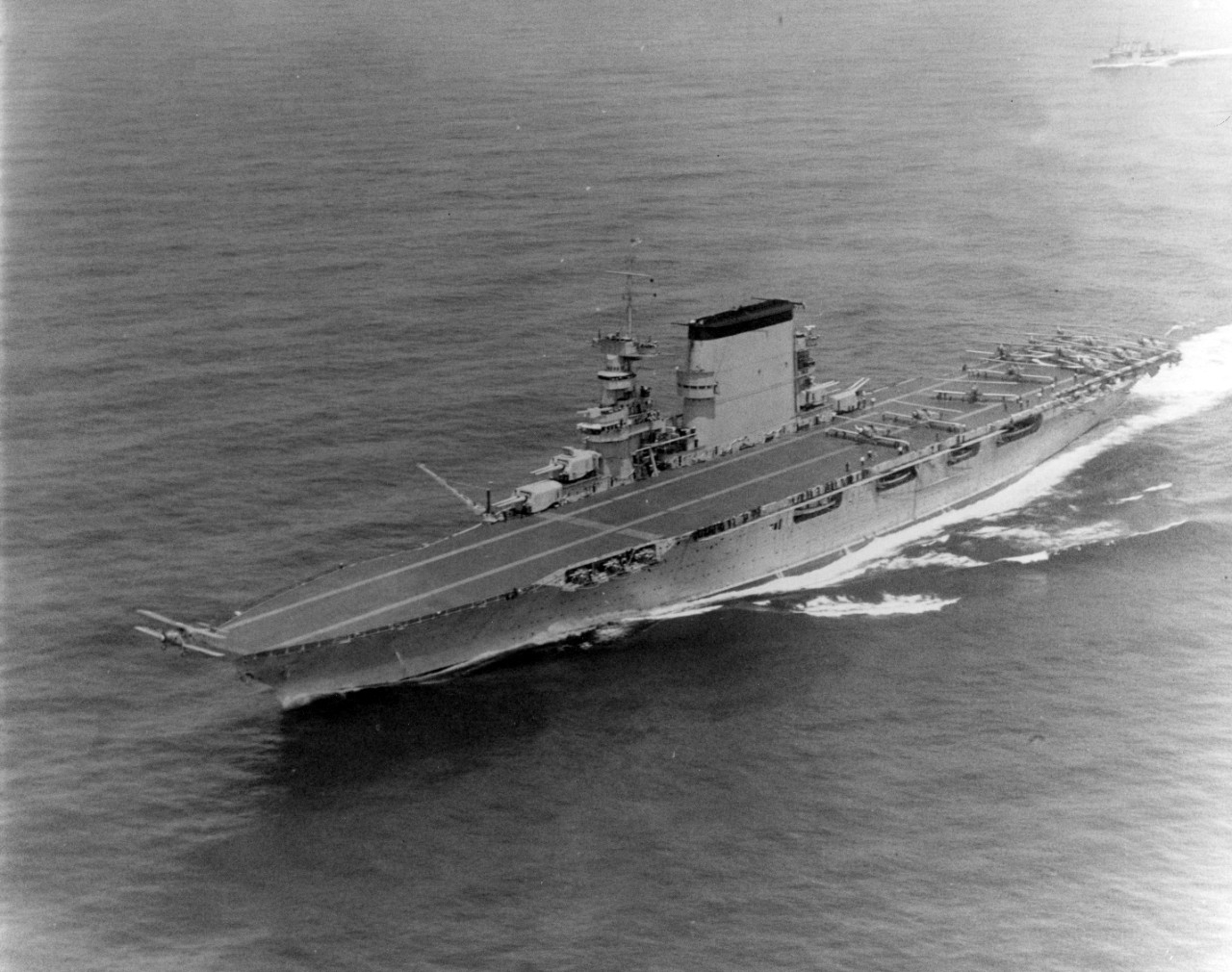 USS Lexington (CV-2) was commissioned on 14 December 1927 with Captain Albert W. Marshall in command. The ship was originally to be built as a battle cruiser, but was later authorized to be completed as an aircraft carrier. After fitting and shakedown, Lexington made way for the U.S. west coast where she joined the fleet at San Pedro, California. While there, she conducted flight training, tactical exercises, and battle problems. Each year, she also participated in maneuvers off the Hawaiian Islands, in the Caribbean, off the Panama Canal, and in the eastern Pacific.

On 7 December 1941, Lexington was at sea transporting aircraft from Pearl Harbor to Midway, in an effort to reinforce the island, when they were informed the Japanese attacked Pearl Harbor. She immediately launched seaplanes to hunt for the Japanese fleet, and by midmorning rendezvoused with the Indianapolis and Enterprise task forces to search southwest of Oahu before she returned to Pearl Harbor on 13 December. On the next day, Lexington was ordered to raid Japanese forces on Jaluit to relieve pressure on Wake, but the orders were later cancelled. She was directed to cover the Saratoga force in reinforcing Wake, but the island fell to the Japanese on 23 December. The two carrier forces were recalled to Pearl Harbor on 27 December. To block possible enemy raids, Lexington patrolled the Oahu-Johnston-Palmyra triangle until 11 January 1942.

On 16 February, as flagship for Vice Admiral Wilson Brown, Lexington made way for an attack on Rabaul and New Britain, scheduled for 21 February as part of Task Force 11 (TF 11). While approaching on 20 February, Lexington was attacked by two waves of enemy aircraft—nine planes to a wave. The carrier's combat air patrol and antiaircraft fire downed most of the attackers. Lieutenant Edward “Butch” O’Hare, without supporting aircraft and without hesitation, challenged nine enemy bombers headed for Lexington. He single-handedly downed five enemy aircraft in a single sortie. For his bravery and skill, O’Hare would later receive the Medal of Honor for saving the carrier from serious damage.

Lexington continued offensive patrols in the Coral Sea until 6 March when she met Yorktown’s TF 17 for a surprise attack flown over the Owen Stanley Mountains of New Guinea, inflicting heavy damage on enemy shipping and installations at Salamaua and Lae on 10 March. After the successful attack, Lexington made way for Pearl Harbor arriving on 26 March.

On 15 April, Lexington departed Pearl Harbor rejoining TF 17 on 1 May. Concentrations of the Japanese fleet were observed in the Coral Sea, and subsequently, Lexington and Yorktown made way into the area to search for the enemy. At this point in the war, the Japanese had to be blocked in their southward expansion or Australia and New Zealand would be cut off from sea communication and faced possible invasion by Japanese forces. On 7 May, seaplanes reported an enemy carrier task force in the area, and Lexington’s air group conducted a successful mission that sank light carrier Shoho. Later that day, 12 bombers and 15 torpedo planes from still-unlocated heavy carriers Shokaku and Zuikaku were intercepted by fighter groups from Lexington and Yorktown. The task force downed nine of the enemy aircraft.

The following morning, a Lexington plane reported the location of Shokaku, and a strike was immediately launched from the carriers that caused heavy damage to the Japanese heavy carrier. By 1100, the enemy had penetrated to within range of the American carriers, and 20 minutes later, Lexington was struck by a torpedo to port. Seconds later, a second torpedo hit to port directly abreast the bridge, and at the same time, Lexington took three bomb hits from enemy aircraft. The attack caused the ship to list at seven degrees while several fires raged onboard. By 1300, damage control parties managed to get the fires under control and had returned the ship to even keel. Lexington began to move at 25 knots, ready to recover her air group. Then suddenly an enormous explosion erupted caused by the ignition of gasoline vapors below. Again, fires raged out of control on the ship. At 1558, Captain Frederick C. Sherman ordered all hands to the flight deck, because he feared for the safety of the crew down below. At 1707, he ordered “abandon ship!” Soon after, an orderly disembarkation began with crewmembers jumping over the side of the ship into the warm waters of the Coral Sea, where they were almost immediately picked up by nearby American cruisers and destroyers. Commander of (TF 17), Rear Admiral Aubrey Fitch, and his staff were transferred to USS Minneapolis while Sherman and his executive officer ensured the men were safely off Lexington—they were the last to leave the doomed ship.

Lexington continued to burn with flames shooting as high as hundreds of feet in the air. USS Phelps moved to within 1,500 yards of “Lady Lex” and sent two torpedoes into the ship’s hull. After one last thunderous explosion, the gallant ship sank at 1956. During the battle and subsequent sinking, Lexington lost 35 aircraft and more than 200 crewmembers. Lexington received two battle stars for her World War II service.

The Battle of the Coral Sea was the first time since the Japanese attacked Pearl Harbor that the enemy’s relentless advancement in the Pacific was halted. It was also the first major U.S. Navy fleet action against Japan and the first naval engagement in history where participating ships never sighted or fired directly at each other. Lexington was part of the price that was paid to halt the Japanese empire and safeguard Australia and New Zealand, but perhaps an equally great contribution had been her pioneer role in developing naval aviators and the techniques which played so vital a role in the ultimate victory in the Pacific.

On March 4, 2018, wreckage from Lexington was discovered by the expedition crew of Research Vessel (R/V) Petrel 3,000 meters (about two miles) below the surface, resting on the floor of the Coral Sea more than 500 miles off the eastern coast of Australia. USS Lexington (CV-2) under construction at the Fore River Shipyard, Quincy, Massachusetts, 30 November 1927. The Hawse Pipes and the unique (for that time) position of the anchors gave Lexington a startling “fighting face.” Naval History and Heritage Command photograph, NH 69130.

Lieutenant Edward Henry “Butch” O'Hare seated in the cockpit of his Grumman F4F Wildcat fighter, circa spring 1942. The plane was marked with five Japanese flags, representing the five enemy bombers he was credited with shooting down as they attempted to attack USS Lexington (CV-2) northeast of the Solomon Islands on 20 February 1942. National Archives photograph, 208-PU-14842.

A Douglas SBD “Dauntless” of VS-2 passed through the screen of USS Lexington (CV-2) during anti-torpedo plane patrol action on 8 May 1942 during the Battle of the Coral Sea. National Archives photograph, 80-G-7390.

USS Lexington (CV-2) when the carrier was abandoned during the afternoon of 8 May 1942. U.S. Navy photograph now in the collections of the National Archives, 80-G-7398.

A mushroom cloud rises after a heavy explosion onboard USS Lexington (CV-2), 8 May 1942, during the Battle of the Coral Sea. U.S. Navy photograph now in the collections of the National Archives, 80-G-16651. USS Lexington (CV-2) and USS Saratoga (CV-3) anchored in Panama Bay, off the Pacific entrance to the Panama Canal, 25 October 1934. In the distance are Panama City, right, and Balboa, left. USS Teal (AM-23) is to the carriers' left and four Omaha-class light cruisers are beyond them. National Archives photograph, 80-G-455967.

USS Lexington (CV-2) underway during the Battle of Coral Sea, 8 May 1942. This view appears to have been taken in the early afternoon, after planes had been recovered and initial damage control measures effected, but before the start of the fires that led to the ship's loss. This is the last known photograph of Lexington in operational condition. Naval History and Heritage Command photograph, NH 76560. 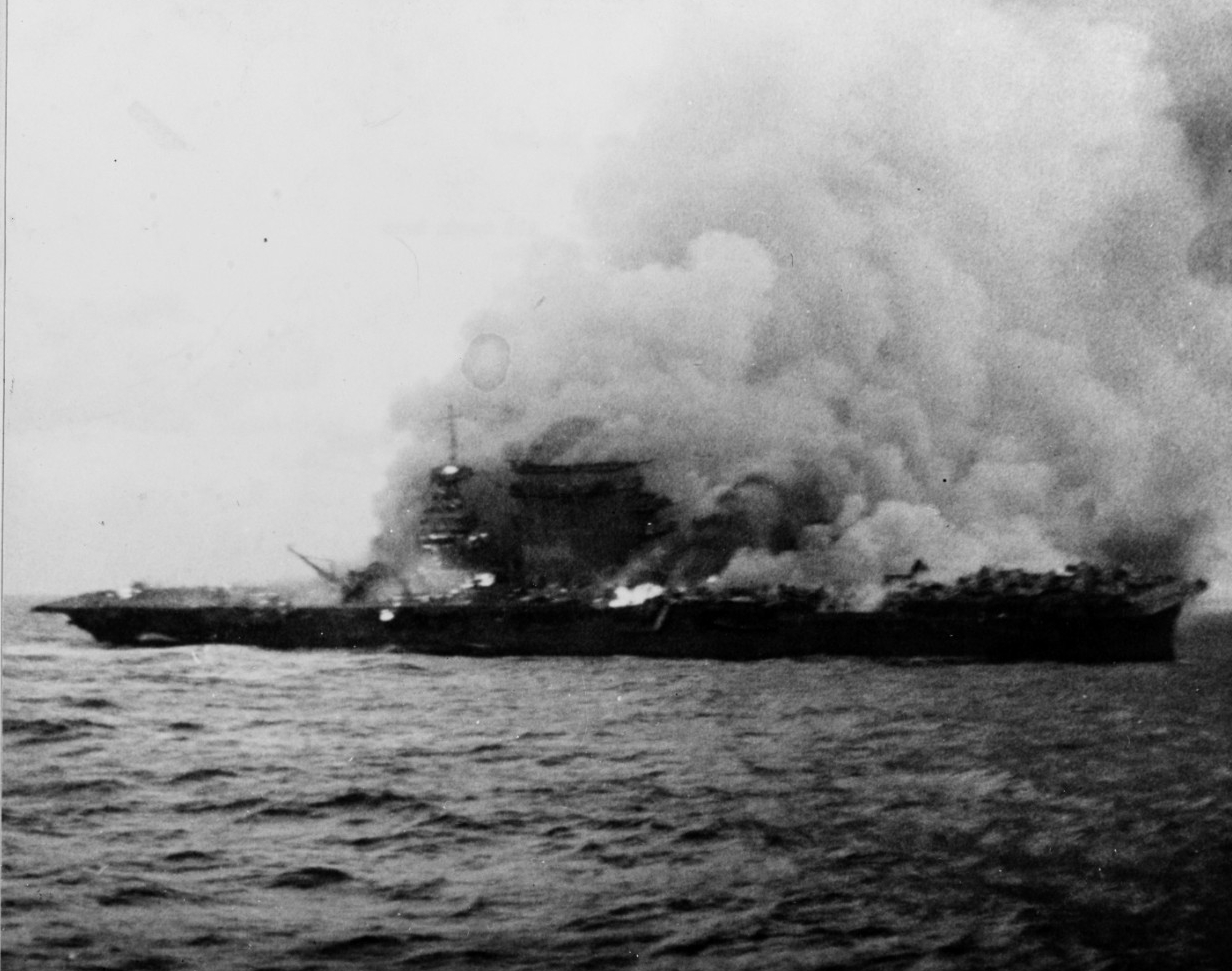 USS Lexington (CV-2) burning and sinking after her crew abandoned the ship during the Battle of Coral Sea, 8 May 1942. Naval History and Heritage Command photograph, NH 51382.

Sailors after the sinking of USS Lexington (CV-2) during the Battle of the Coral Sea. Naval History and Heritage Command photograph, UA 562.02.