Holiday Menus from the Steam Era to the Nuclear Age 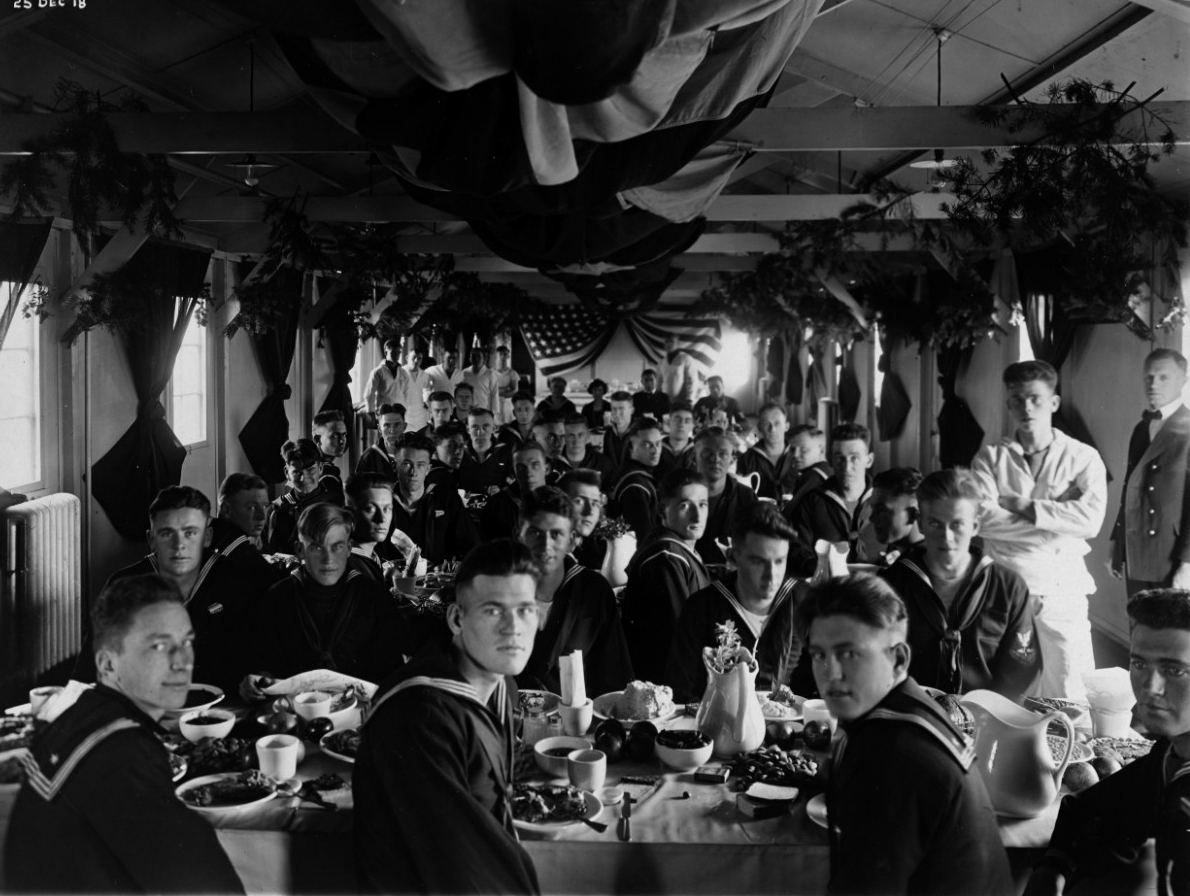 In the Navy, the period between Christmas and New Year can be a poignant, introspective time, particularly during deployments and operations far from homeport and family. Recognizing this, the service has always strived to emphasize the joyous side of the holidays, not least through dinners that have drawn on everything that storerooms, reefers, and local markets have had to offer. A sampling of command menus from NHHC’s collections from the 1910s through the 1950s, from the mess spaces and wardrooms of the aging coastal monitor to those of the Cold War destroyer, follows. 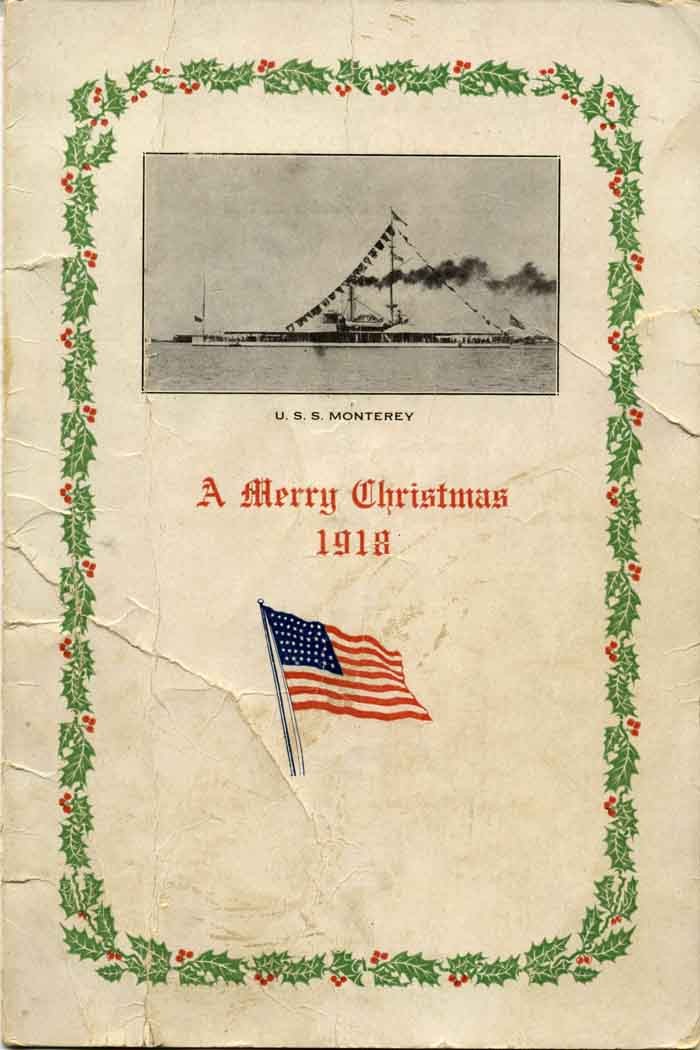 USS Monterey (Monitor No. 6). In service since 1893, Monterey was serving as a station ship at the Pearl Harbor, Hawaii, submarine base in 1918. Her crew was offered a choice of three entrees, including local red snapper. 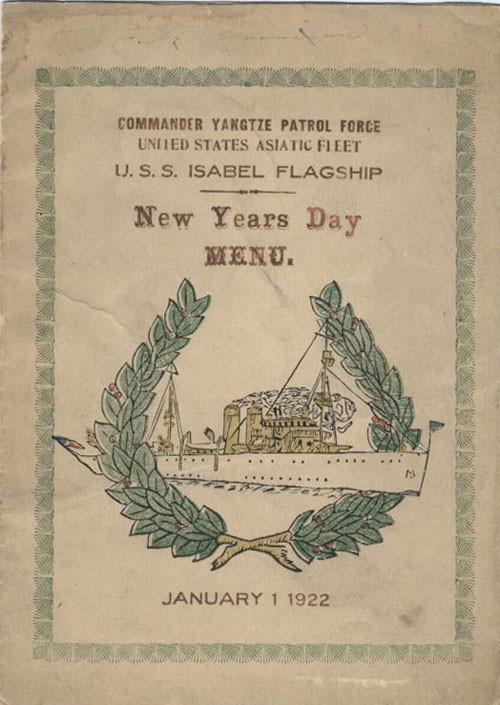 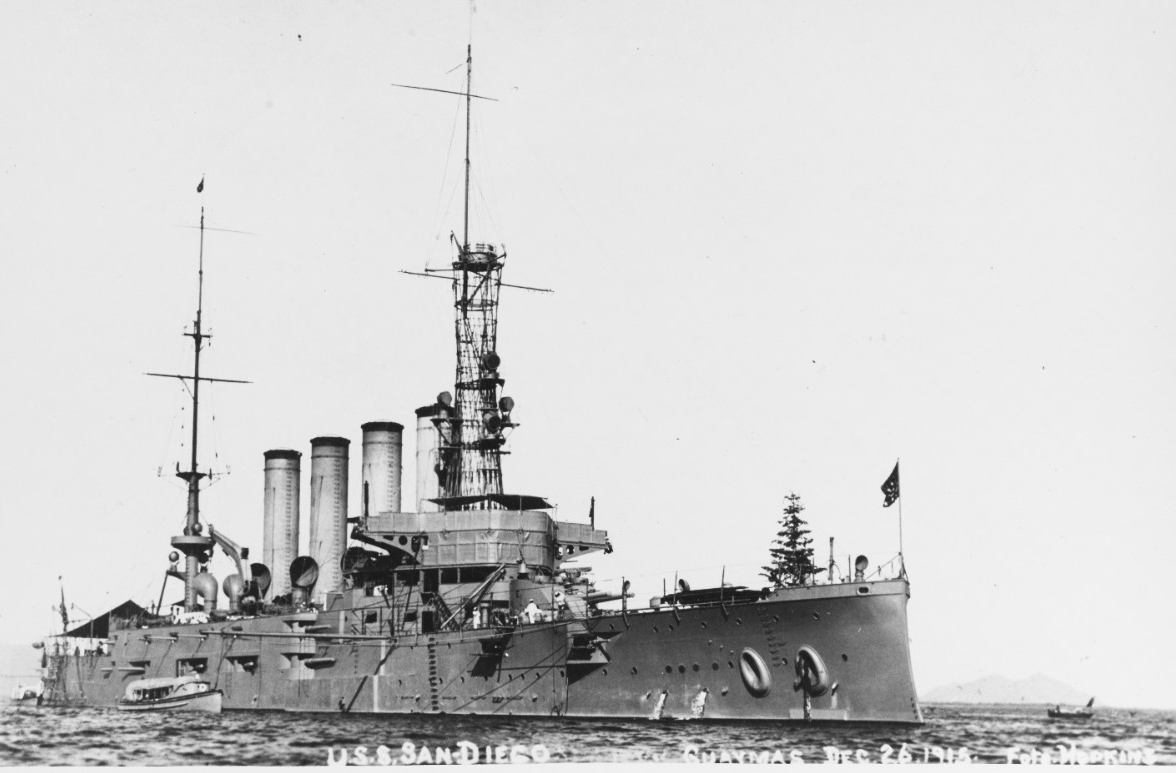 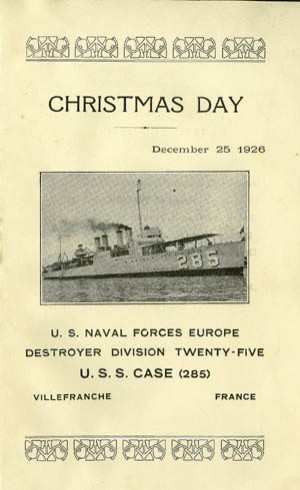 USS Case (DD-285). Villefranche, on the French Riviera, was a regular port call for Navy ships during the 1920s and 1930s. However, Case's Christmas Day menu is solidly American. 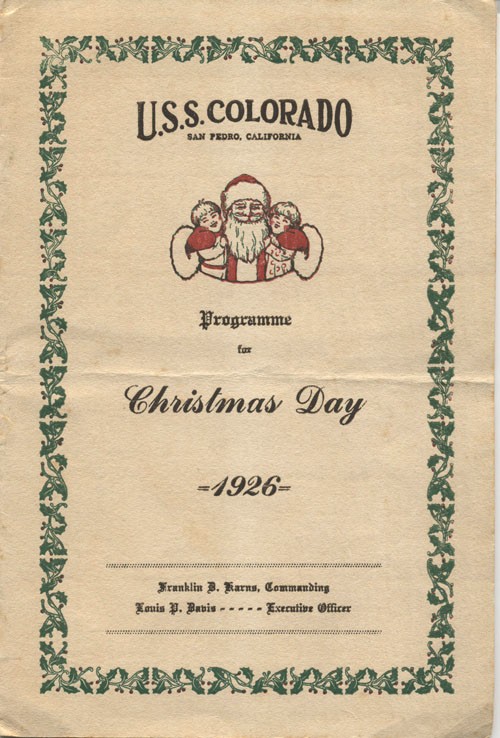 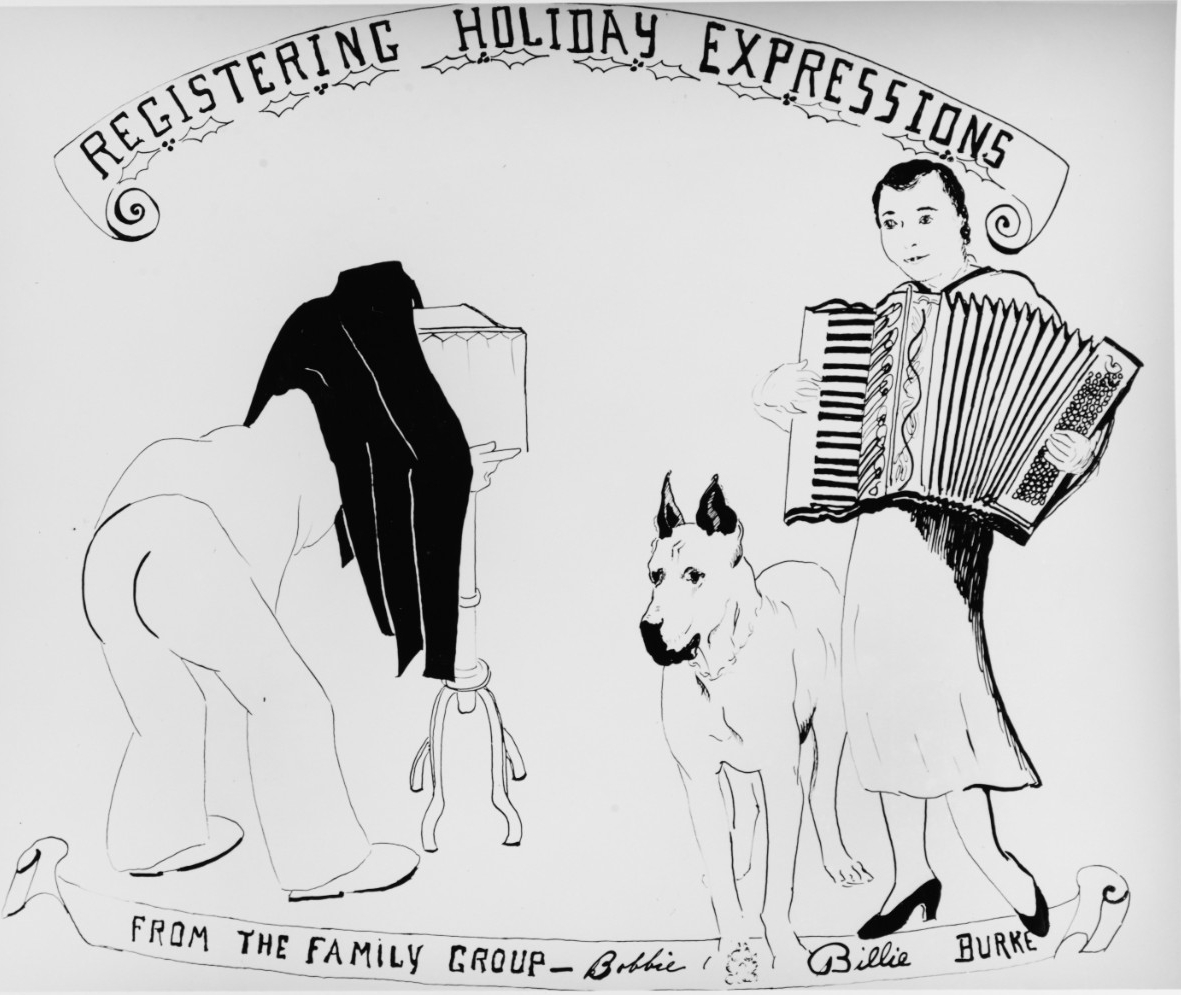 Christmas card of 1930s vintage from future CNO Admiral Arleigh A. Burke and Mrs. Burke, featuring depictions of then-Lieutenant Burke at the camera, Mrs. Burke with accordion, and their great dane dog. The card was drawn by Mrs. Burke (NH 83973). 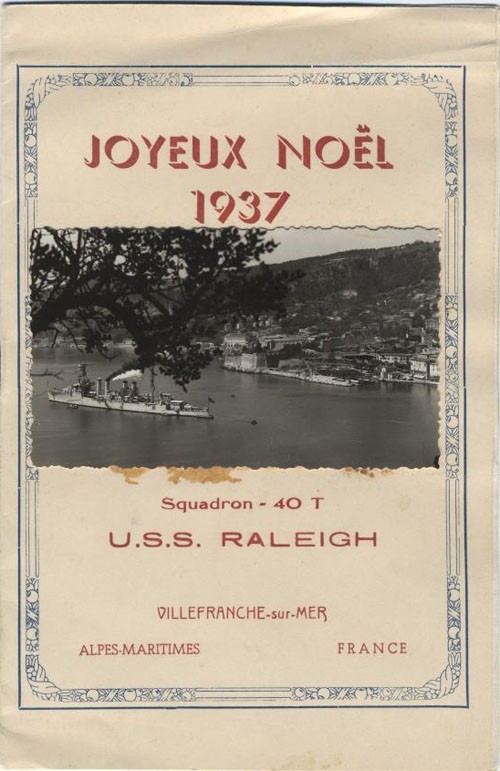 USS Raleigh (CL-7). Another Villefranche port call: In contrast to USS Case above, Raleigh couched her entire dinner in French. 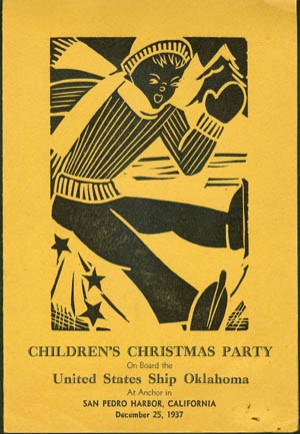 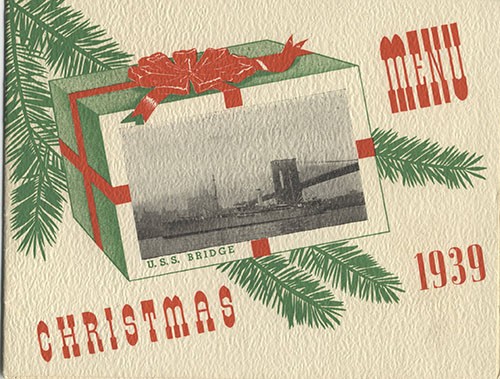 USS Bridge (AF-1). Commissioned in 1917, Bridge spent most of her active service before and during World War II in the Pacific. However, the inadvertent pun in this image of Bridge and the Brooklyn Bridge, from the ship's tour in the Atlantic during the 1920s, was likely too good to resist using on a holiday menu. 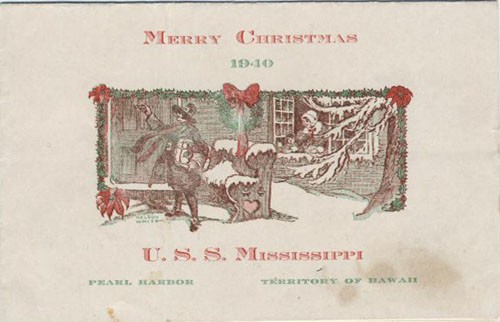 USS Mississippi (BB-41). Although home-ported in San Pedro, California at the time, Mississippi spent Christmas 1940 in Hawaii, where this expansive dinner was served. When the Japanese attacked Pearl Harbor a year later, Mississippi was on patrol service in the North Atlantic. 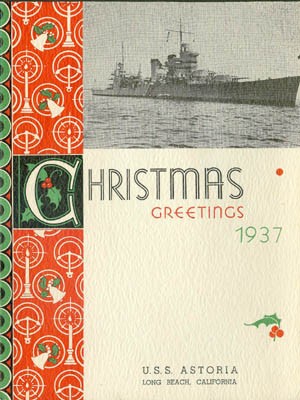 USS Astoria (CA-34). Commissioned four years previously, Astoria was a "treaty cruiser," constructed under the limitations of the London Naval Treaty. She was lost at the Battle of Savo Island on 9 August 1942. 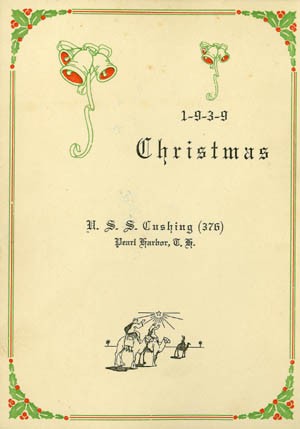 USS Cushing (DD-376). Despite being home-ported in exotic Pearl Harbor in 1939, Cushing's Christmas dinner was as unremarkable as its menu card. 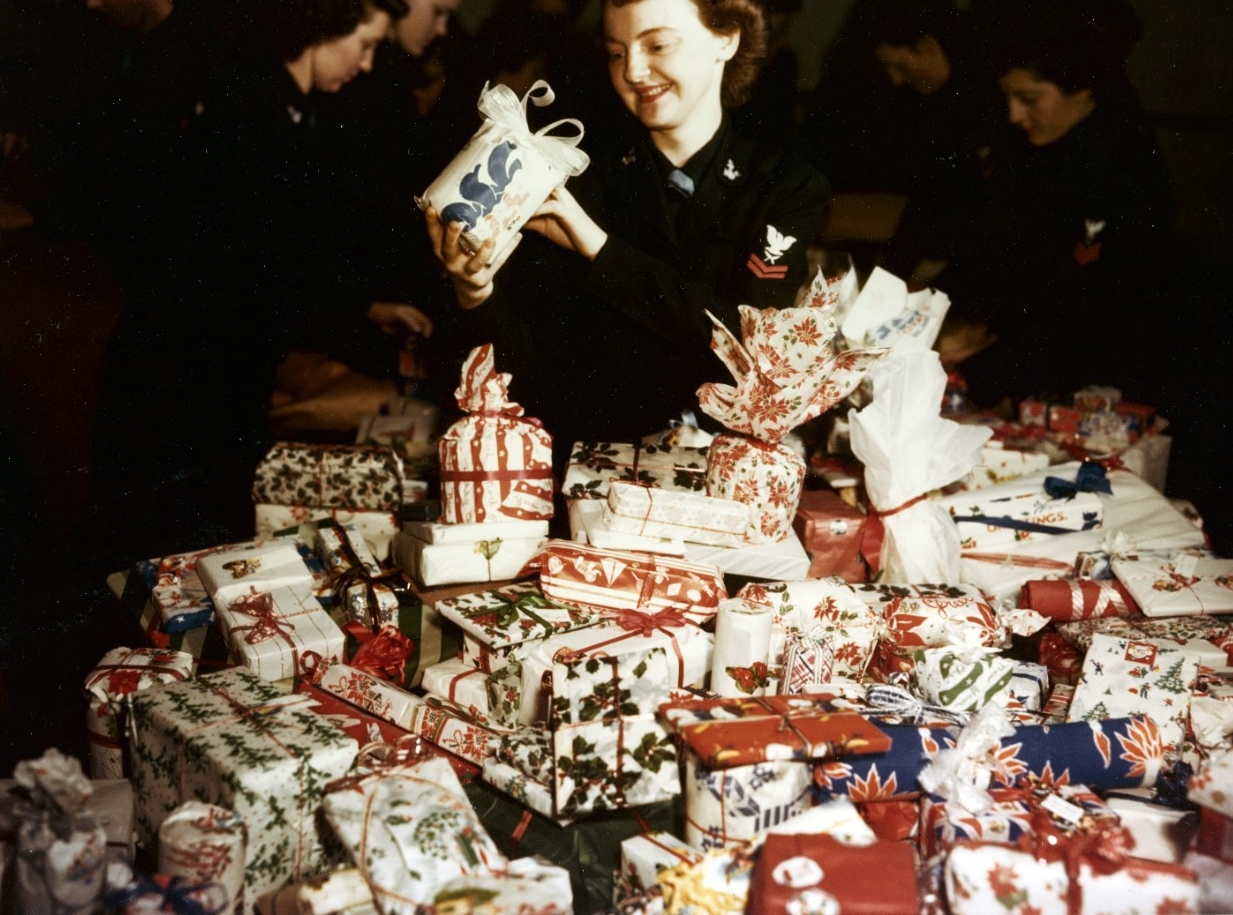 WAVES of the Bureau of Supplies and Accounts help wrap Christmas presents for Navy and Marine Corps convalescents at the Bethesda Naval Hospital, Maryland, circa 1944. Admiring a package is Yeoman Second Class Ann G. Fee (80-G-K-14451). 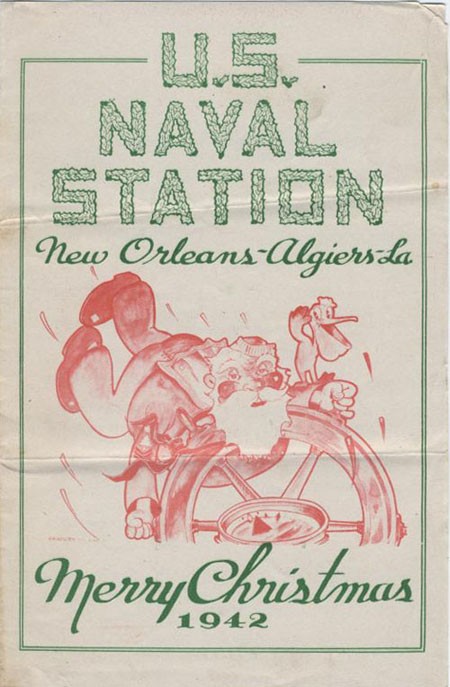 Naval Station New Orleans, Algiers, Louisiana. Despite being printed and mimeographed on base, creative talent is still apparent on this menu. Note that the two senior enlisted commissary billets are actually filled by retired chief petty officers. 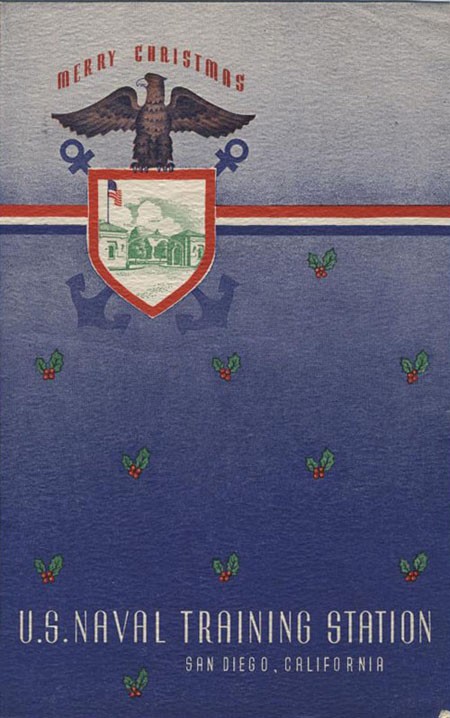 U.S. Naval Training Station, San Diego, California. The station's commanding officer added an encouraging note to this 1943 menu. Although World War II's duration was still uncertain, its outcome was no longer in doubt. 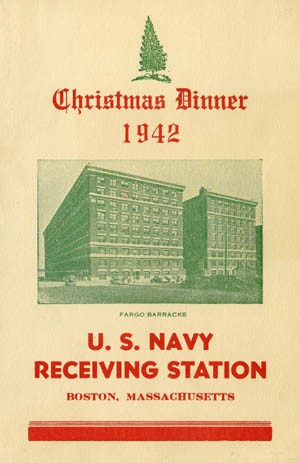 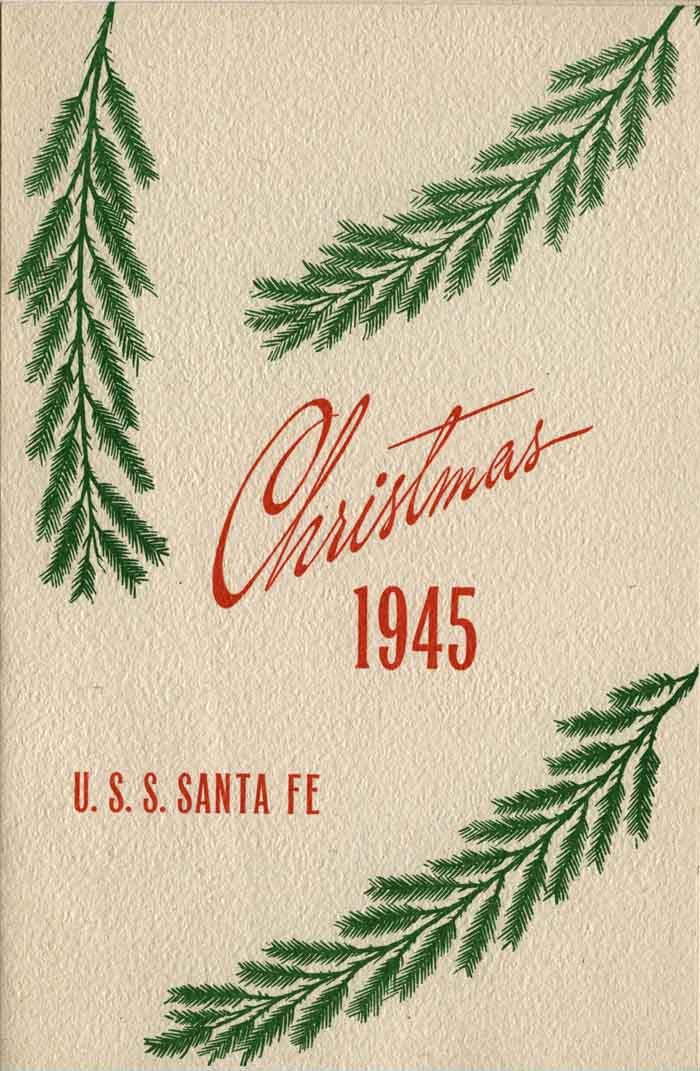 USS Santa Fe (CL-60). At the time of the first peacetime Christmas in six years, Santa Fe was engaged in "Magic Carpet" operations, ferrying servicemembers from Pacific bases to the U.S. west coast to be discharged. 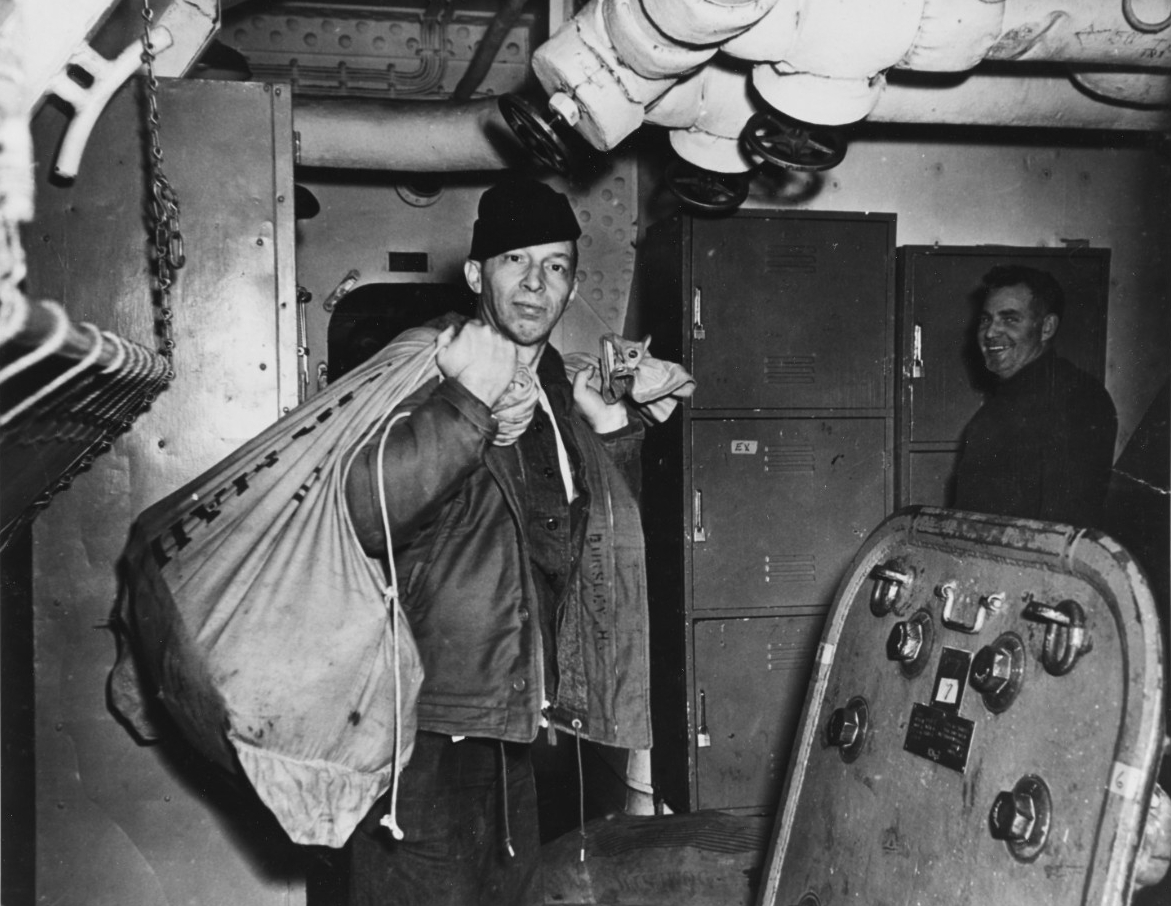 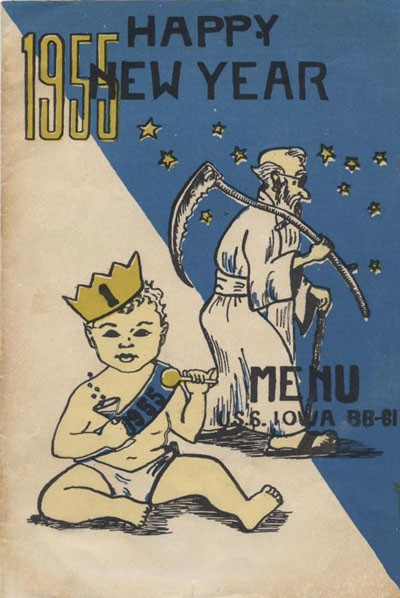 USS Iowa (BB-61). In January 1955, Iowa was still flagship of Commander, Battleship-Cruiser Force, U.S. Atlantic Fleet, but was to detach shortly for an extended Mediterranean cruise with Sixth Fleet. This menu was produced in the ship's print shop. 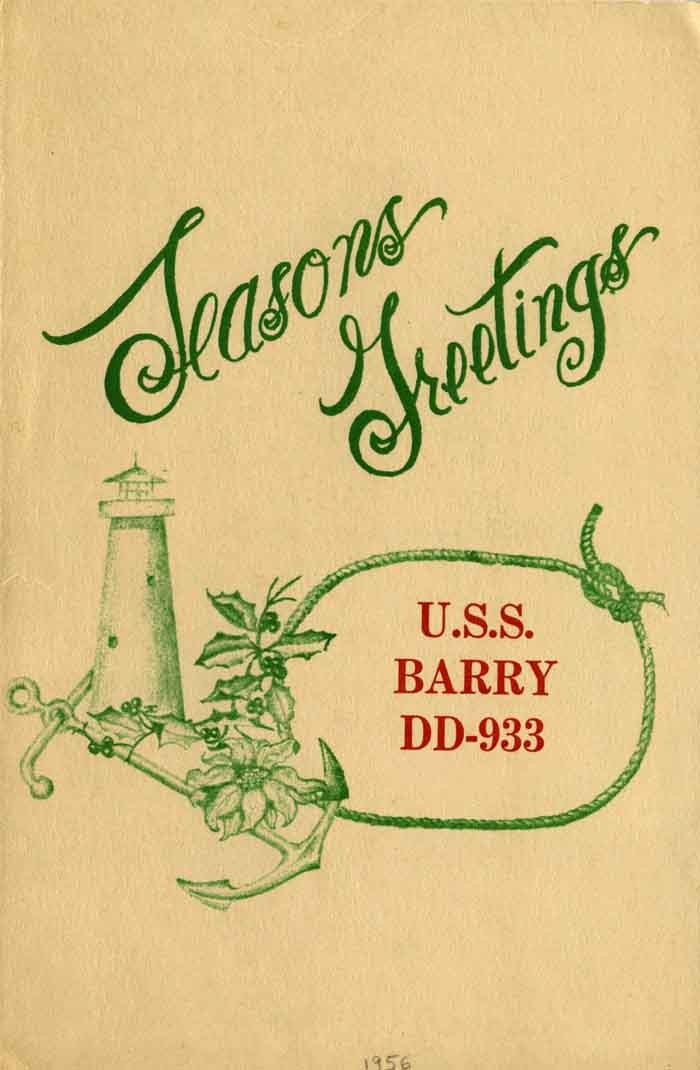 USS Barry (DD-933). Barry was commissioned in September 1956, three months before this holiday dinner. At the time it was being served and prepared, the ship was still being fitted out at Boston Naval Shipyard. Nonetheless, the meal was extensive and included a challenge to most cooks: enough Yorkshire pudding for the entire crew. 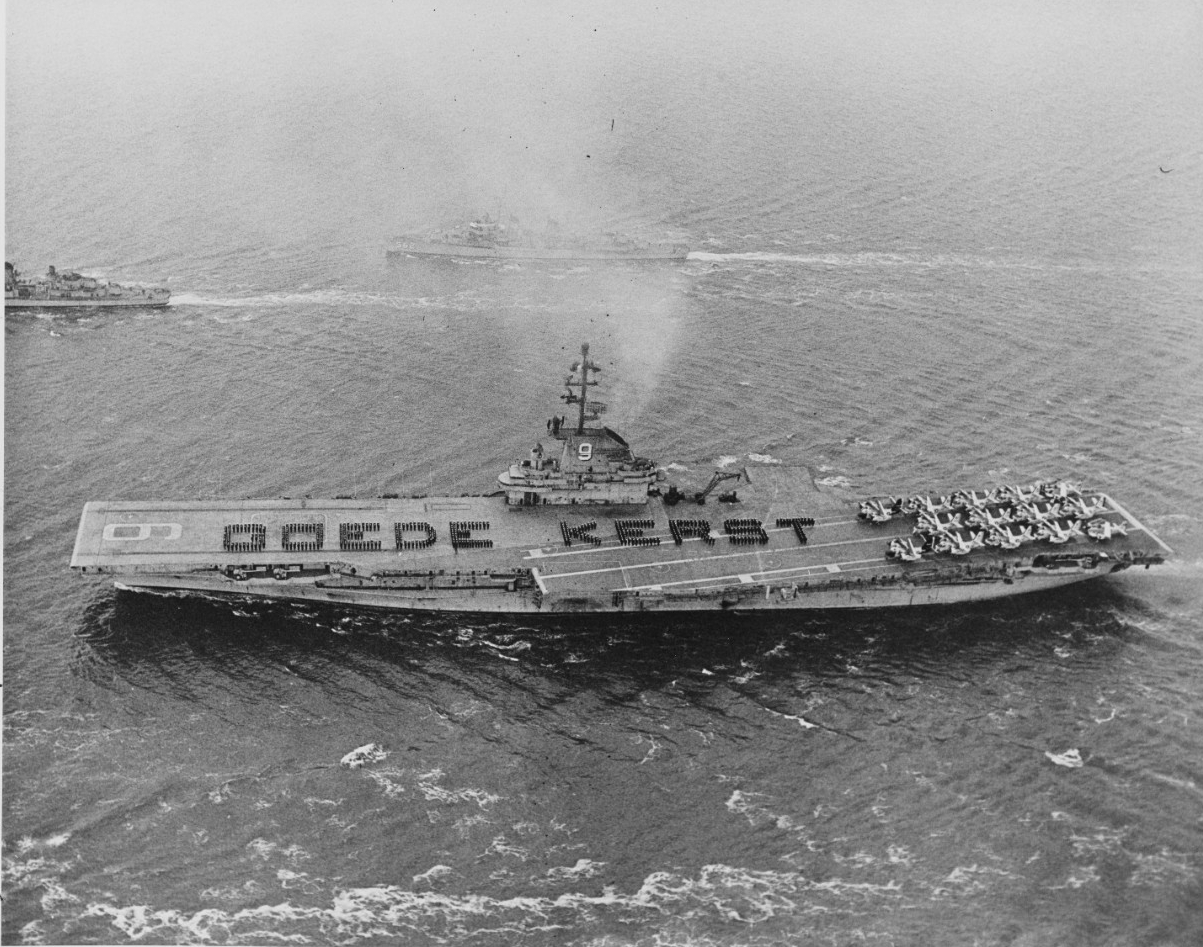 As USS Essex (CVS-9) steamed toward a nine-day visit to Rotterdam, Holland, for the Christmas holidays, crewmen formed the traditional Dutch equivalent of America's "Merry Christmas" on the flight deck, 29 December 1961 (NH 97273).

Image Gallery: Christmas in the Navy