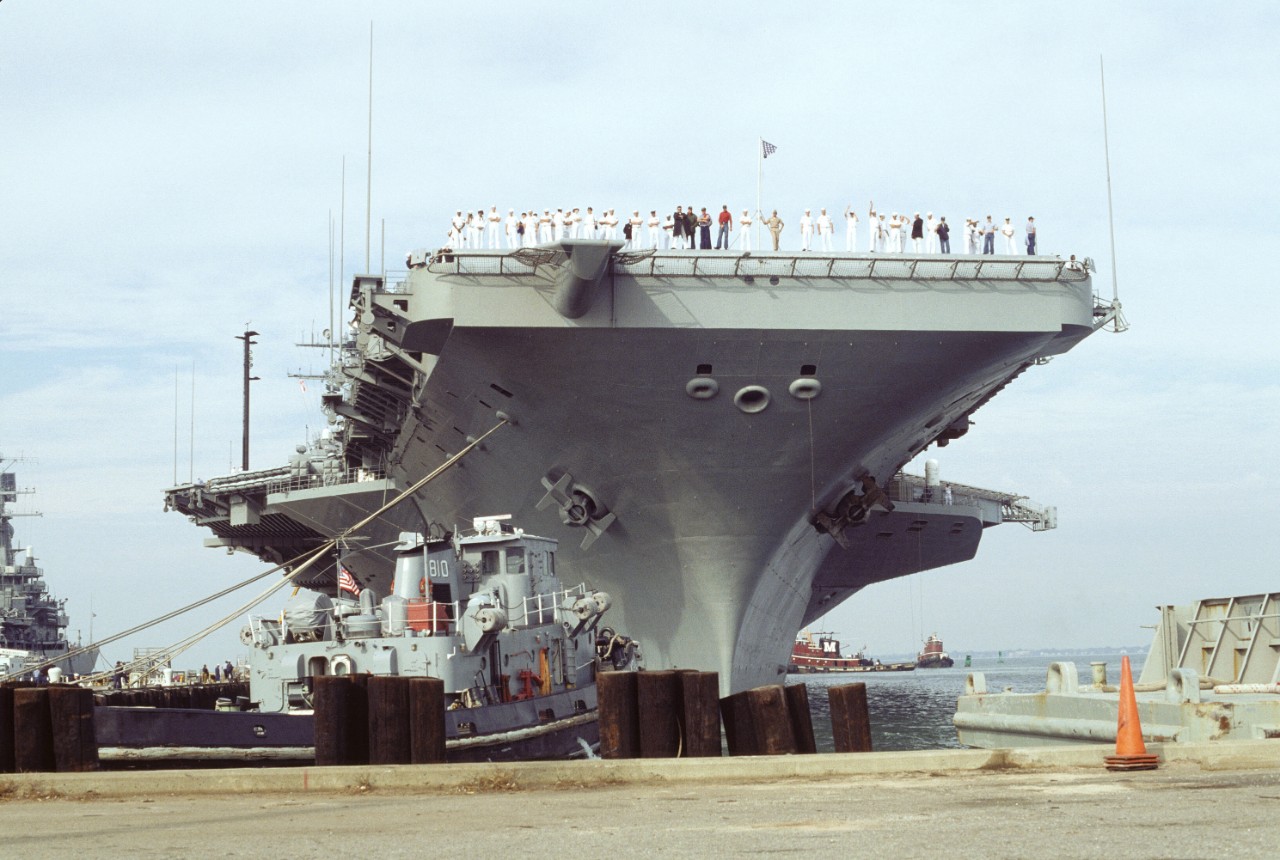 Dwight D. Eisenhower (CVN–69), is backed from the pier with the aid of the yard tug boat Anoka (YTB-810). This six-month deployment to the Mediterranean is the first with female Sailors onboard a combatant ship. 20 October 1994 (National Archives photo 6493349)

On 7 March 1994, the first women to serve aboard a U.S. combatant ship received their assignments from the Navy.

According to the commander of Dwight D. Eisenhower (CVN-69), the women’s arrival on the ship on and after 10 March “produced relentless media interest that continued throughout the year." In fact, Eisenhower accommodated more than 300 media visits that year ─ all squeezed into the short intervals between combat missions.[footnote:footnote0]

Eisenhower’s crew of women and men participated in the key operations of 1994: Uphold Democracy, in the Caribbean; Southern Watch, in the Arabian Gulf; and Deny Flight, Provide Promise, and Sharp Guard, in the Mediterranean.[footnote:footnote1]

Although Eisenhower accommodated many firsts in 1994, including the first female chaplain, there was nothing new about women in battle and in the line of fire. In the American Revolution, Molly Pitcher fired artillery at the British before being wounded and subsequently decorated for her heroism.[footnote:footnote2]  In 1862, four nuns and five African-American nurses cared for patients on Red Rover, the Navy’s first hospital ship. Thousands more women came under fire as nurses in the late nineteenth and early twentieth centuries, especially in the Spanish-American War, the World Wars, the Korean War, and in Vietnam.[footnote:footnote3]  What changed in the early 1990s were the rules around women and combat, which resulted in unprecedented opportunities for female Soldiers, Sailors, pilots, and medics.

It was women’s involvement in the First Gulf War that ultimately caused civilian and military leaders to rethink the ban on women in combat roles. According to military historian Rosemary Skaine, the exclusion of women from combat roles became insupportable when Operations Desert Shield and Desert Storm “exposed 41,000 servicewomen to hostile fire.”[footnote:footnote4]

News stories, photographs, and film footage accustomed the American public to the sight of women in combat gear and armed with 9mm sidearms and M-16s.[footnote:footnote5]  The Today Show covered the story of Rhonda Cornum and Melissa Rathbun-Nealy having been taken as POWs as if it had been a first in U.S. history when, in fact, women had been prisoners of enemy forces many times before, perhaps most notably in the Pacific during World War II.[footnote:footnote6]  Yet the media attention on women’s forward roles in the First Gulf War cast a floodlight on their exposure to all the dangers that their male counterparts faced.

In response to women’s new visibility in war, the President’s Commission on the Assignment of Women in the Armed Forces convened in 1991 in order to “assess the laws and policies restricting the assignment of female servicemembers.”[footnote:footnote7]

At the same time, Congress repealed the law banning women from serving aboard aircraft engaged in combat missions. This move created a problem in immediate need of a solution: in theory, women could now fly combat missions from combatant aircraft carriers but might not be allowed permanent billets there.

In spring 1993, President Clinton’s Secretary of Defense Les Aspin called on Congress to repeal 10 USC 6015, the law barring women from combatant ships, and directed the Navy to make preparations for mixed-sex crews. This direction came at the end of a long debate within the Navy and other branches about the meaning of “combat.” In 1988, the Department of Defense had issued its Risk Rule, which, among other things, barred women from situations in which there might be risk of hostile fire, capture, or direct combat.[footnote:footnote8]  But by early 1990, with the First Gulf War subjecting female servicemembers to all but the last, direct combat, the Risk Rule made little sense. In that year, the Navy Women’s Study Group began the process of trying to revise the Risk Rule to reflect the new ambiguities of battle.

According to Admiral Ronald J. Zlatoper, the inclusion of women on combatant ships made perfect sense: It was, in his words, “the logical progression after 50 years of service by Navy women.”[footnote:footnote9]

And so, on 30 November 1993, Congress repealed 10 USC 6015. Just a few months later, Dwight D. Eisenhower welcomed the first cadre of women aboard a combatant vessel.[footnote:footnote10]

Lieutenant Deborah Davis, MC, USNR, saw firsthand how the Navy went about retrofitting ships for women. “It was usually a matter of putting a few separations in place,” she explains, “partitioning an area or two off from the male crews’ quarters, and making sure people could still get where they needed to go in the ship.”[footnote:footnote11]

In practice, however, the gender integration of the Navy produced the same tensions and conflicts as in the other branches of the military and in civilian society more generally. The process of opening combatant ships to women coincided with a national discussion about sexual harassment and assault, exemplified by the Anita Hill testimony and the Tailhook investigation of the early 1990s. In response to the latter, CNO Admiral Frank Kelso implemented the first fleet-wide educational programs to address sexual harassment and assault, in 1992.[footnote:footnote12]

The following year, Lieutenant Darlene Iskra obtained the distinction of being the first woman to command a U.S. Navy ship, Opportune (ARS-41), a noncombatant vessel. This breakthrough helped clear the way for Commander Maureen Farren to become the first female commanding officer of a combatant vessel, Mount Vernon (LSD-39), in 1998.[footnote:footnote13]

The opening of combatant ships to Navy servicewomen has created new opportunities for women to attain distinction in battle. Female aviators now fly strike missions from carriers. Female submariners now launch ballistic missiles from under the waves. Female medics now treat thousands of Sailors from one war zone to the next. These servicewomen are pioneers, to be sure, but they are also heirs to a long tradition of female involvement in history’s most dangerous battles, from the American Revolution to the War on Terror. 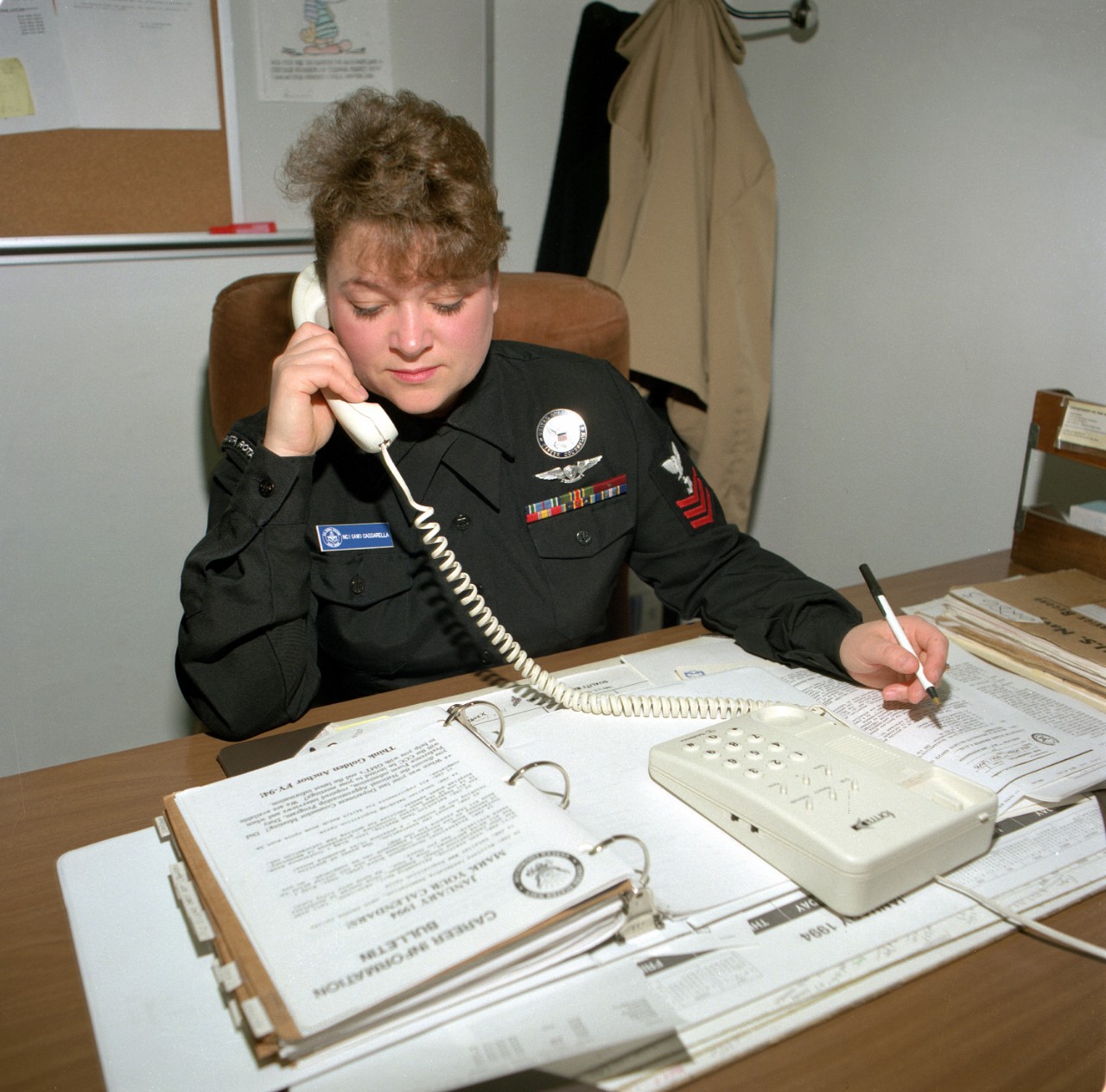 Navy Counselor First Class (NC1) Cheryl Ann Cassarella is shown working at her desk at Naval Station Rota where she is the command career counselor. Petty Officer Cassarella has received orders to the nuclear-powered aircraft carrier USS Dwight D. Eisenhower (CVN-69). She will become one of 59 other Navy women who will break new ground as they embark onboard Dwight D. Eisenhower as the first Navy women permanently assigned to a combatant warship. 10 March 1994 (National Archives photo 6488640) 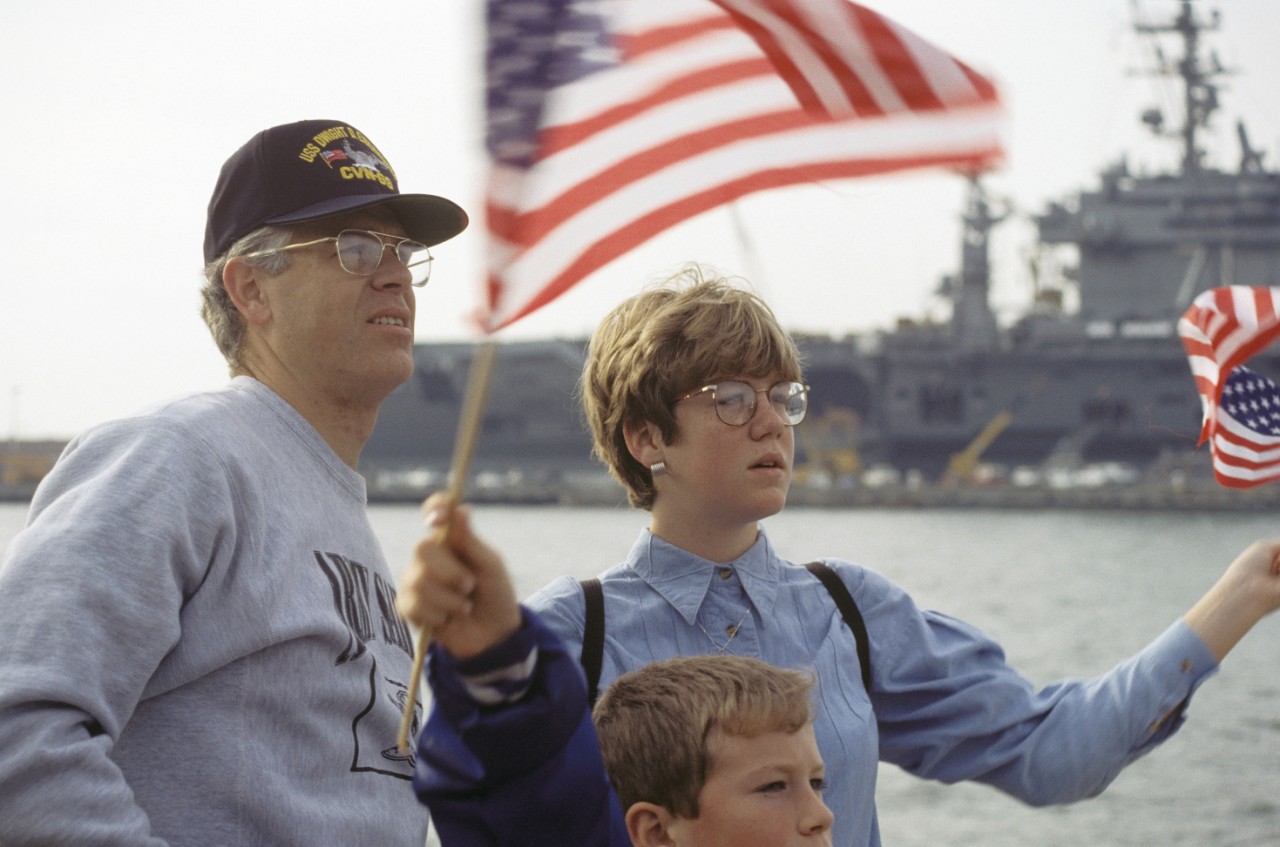 Dale Hamby, husband of LCDR Janice Hamby of the Operations Department on board the nuclear-powered aircraft carrier USS Dwight D. Eisenhower (CVN-69), waves goodbye along with their two children, as the ship deploys for a six-month deployment to the Mediterranean. Dwight D. Eisenhower is deploying with over 350 women as part of the crew, a first for a combatant warship. 20 October 1994 (National Archives photo 64933350)