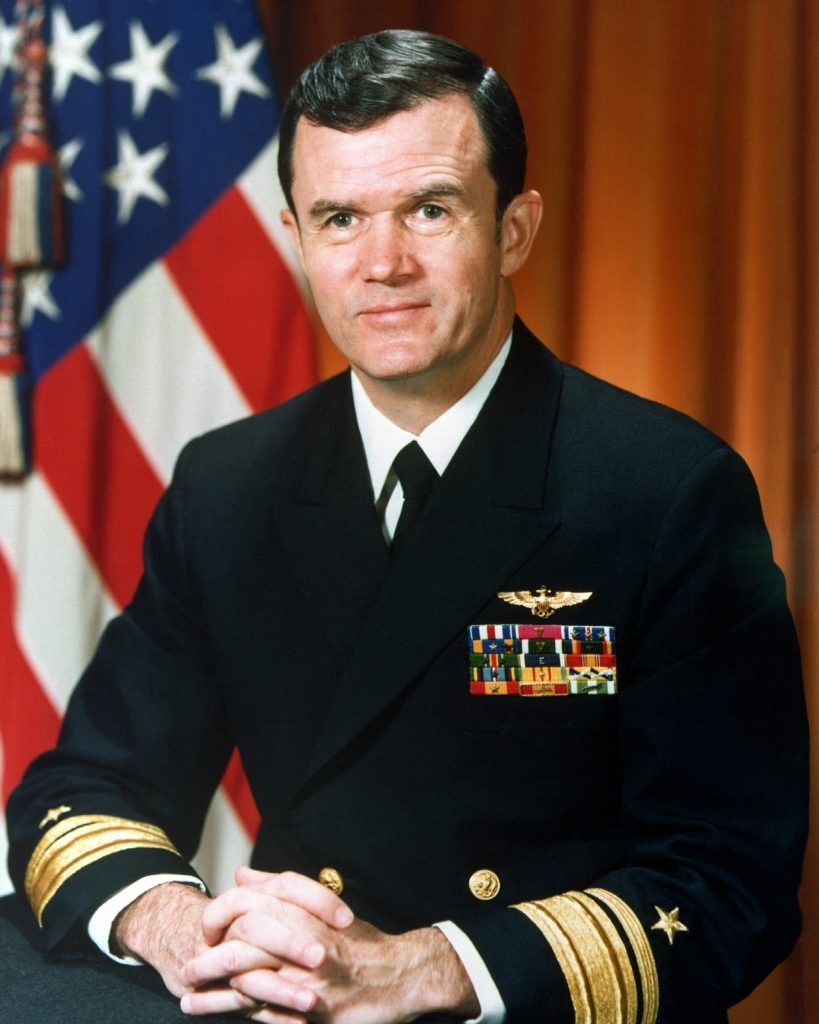 It is with deep regret I inform you of the passing of Rear Admiral Thomas Francis “Tom” Brown III, U.S. Navy (Retired) on May 14, 2020, at age 87. Tom entered Officer Candidate School in 1954 and served as an aviator until his retirement in 1985 as the Director, Strike and Amphibious Warfare Division (OP-954) in the Office of the CNO. In his 343 combat missions in Vietnam, he was awarded a Silver Star for dropping a bridge span in North Vietnam, four Distinguished Flying Crosses, and multiple other awards. His commands included VA-37, CVW-19, USS Caloosahatchee (AO-98), USS Midway (CV-41), Military Enlistment Processing Command, CARGRU 1, and CARGRU 5/CTF-77, during which he amassed 4,843 hours of accident-free flying and 1,017 traps.

Tom started out fast right from the blocks, graduating Summa Cum Laude and Class President from Mount Saint Mary’s College in Emmitsburg, Maryland, in 1954, with a Bachelor of Arts in Philosophy and English. On September 29, 1954, he enlisted in the U.S. Naval Reserve and reported in October to Officer Candidate School (OCS) in Newport, Rhode Island, gaining his commission as an ensign on March 3, 1955. Ensign Brown then proceeded to Pensacola, Florida for the Naval Aviation Basic Training Course and then to Beeville, Texas for additional flight training flying the SNJ, TV-2 and F9F-2 Panther. He was designated a Naval Aviator (HTA) on July 18, 1956.

In March 1960, Lieutenant Brown reported as Mission Phase Officer for Attack Squadron One Two Five (VA-125) at NAS Moffett Field, responsible training pilots and enlisted personnel for assignment to combat carrier squadrons; he continued flying the A4D Skyhawk. In August 1961, Lt. Brown reported to the NROTC unit at the University of California Berkeley, where he earned a Masters Degree in International Relations, while still managing to fly the A4D-1 with the Naval Air Reserve Unit at NAS Alameda. In March 1963, Lt. Brown attended the Aviation Safety School at University of Southern California, also finding time to fly the A-4A Skyhawk from NAS Los Alamitos. In February 1963, he returned to VA-125 at NAS Moffett Field.

In August 1963, Lt. Brown reported to Attack Squadron One Six Four (VA-164), in Attack Carrier Air Wing Sixteen (CVW-16), the same month that USS Oriskany (CV-34) deployed from Alameda to the Far East, mostly operating from Japanese ports but reacting to the coup in South Vietnam in which President Diem was killed. Following overhaul at Puget Sound, Oriskany deployed again in April 1965, joining USS Bon Homme Richard (CVA-31) and USS Midway (CVA-41) shortly after the commencement of Operation Rolling Thunder, the bombing campaign of North Vietnam (which lasted until a “bombing pause” in December 1965, before resuming in 1966). Between May and November 1965, CVW-16 flew 12,000 combat sorties and dropped 10,000 pounds of bombs. Promoted in July 1964, Lieutenant Commander Brown flew 100 combat missions flying the A-4B/E before detaching in August 1965 (all of CVW-16’s 15 combat losses occurred between the end of August and November 1965, including the shoot-down of CVW-16 Wing Commander, Cmdr. James Stockdale, on September 9). Oriskany was awarded a Navy Unit Commendation for this deployment. Lt. Cmdr. Brown was awarded a Navy Commendation Medal with Combat “V” and several Air Medals.

In August 1965, Lt. Cmdr. Brown reported to VA-125 (which had moved to NAS Lemoore, California), as Quality Control Officer, training replacement pilots for fleet combat squadrons. In October 1966, he reported to Attack Carrier Air Wing Fifteen (CVW-15), as Operations Officer and Electronic Warfare Officer, embarked on attack carrier USS Coral Sea (CVA-43), deploying for Vietnam in July 1967. Flying with Attack Squadron One Five Five (VA-155), Lt. Cmdr. Brown flew 69 combat missions into the increasingly deadly North Vietnamese air defenses. The squadron Commanding Officer was lost at sea when his jet went over the side of the flight deck. The squadron also engaged six North Vietnamese PT-Boats in October 1967, sinking four of them. Nearing the end of her deployment, Coral Sea was sent to the Sea of Japan in reaction to the North Korean seizure of the intelligence collection ship USS Pueblo (AGER-2). Lt. Cmdr. Brown was awarded his first Distinguished Flying Cross and several more Air Medals, and Coral Sea was awarded a Meritorious Unit Commendation.

In February 1970, Cmdr. Brown reported to Attack Squadron One Seven Four (VA-174) at NAS Jacksonville for transition training to the A-7A Corsair II. In July 1970, he assumed duty as Executive Officer of Attack Squadron Three Seven (VA-37), embarked on attack carrier USS Saratoga (CVA-60) for a Mediterranean deployment. The deployment included crisis response operations in the Eastern Mediterranean in response to the death of Egyptian President Nasser and an outbreak of civil war between the Jordanian Army and Palestinians in Jordan, known as “Black September,” (the origin of the name of the Palestinian terrorist group responsible for the massacre of Israeli athletes at the 1972 Munich Olympics). In May 1971, Cmdr. Brown assumed command of VA-37, embarked on Saratoga for operations in the North Atlantic and the Mediterranean, with an experimental air wing that combined strike and anti-submarine warfare aircraft on the same carrier (which would shortly thereafter result in the retirement of the anti-submarine carriers (CVS). 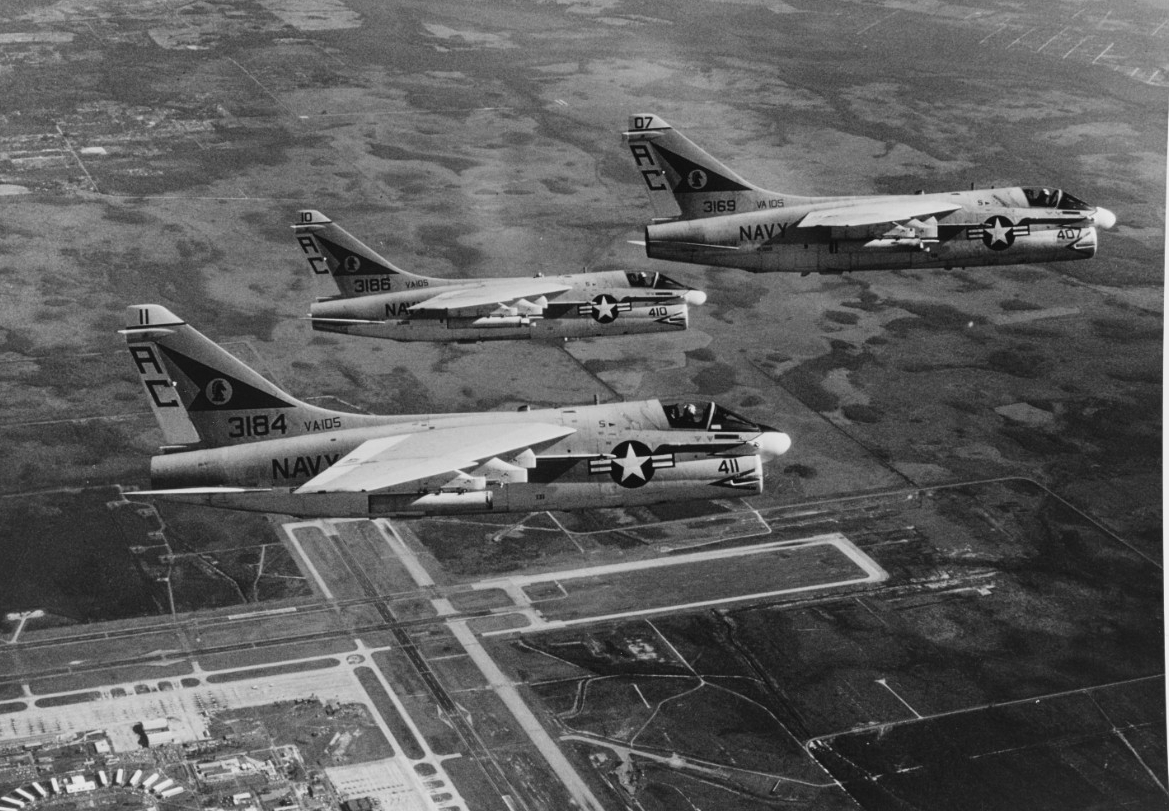 Between January 1972 and May 1972, Cmdr. Brown underwent prospective air wing commander (PCAG) training and then assumed command of Attack Carrier Air Wing Nineteen (CVW-19), which had replaced CVW-16 on Oriskany. With the onset of the North Vietnamese “Easter Offensive” (a conventional invasion of South Vietnam, complete with armored tank forces), Oriskany’s workups were accelerated and she deployed on June 1, 1972, and arrived in the South China Sea in late June 1972 in the midst of Operation Linebacker, the resumption of bombing of North Vietnam (after the North Vietnamese had several years to significantly beef up their surface-to-air missile capability without being molested as “Peace Talks” dragged on and on). This period saw some of the most extensive North Vietnamese surface-to-air missile and MiG fighter opposition of the war. Oriskany was off-line for a significant period after colliding with the ammunition ship Nitro (AE-23) and then losing two propellers and a shaft. Despite this, Cmdr. Brown flew 174 combat missions, some of them in Laos, and many of them during Operation Linebacker II (the “Christmas bombing” campaign). This was a particularly intense period of U.S. air strikes in heavily defended areas that had previously been “off-limits,” resulting in high U.S. losses, although it achieved the objective of getting the North Vietnamese back to the Peace Talks, and the Paris Peace Accords were signed January 27, 1973. Oriskany and CVW-19 were returning from this deployment when North Vietnam released 138 U.S. Naval Aviators, some of whom had been held since 1964. Cmdr. Brown was awarded a Silver Star for action on August 27, 1972, (the same day as Operation Lion’s Den), a Legion of Merit with Combat “V” and three more Distinguished Flying Crosses during this deployment.

In June 1973, Cmdr. Brown ended up in his first non-flying assignment as a student at the National War College at Fort McNair, Washington D.C., graduating with distinction. He then spent a long year in the Bureau of Naval Personnel as Head, Aviation Commander Assignment Branch (PERS 431). In August 1975, he assumed command of fleet oiler USS Caloosahatchee (AO-98), and his career survived a minor collision with USS Inchon (LPH-12) in December 1975 in heavy seas off Italy. The deployment also included operations in the Baltic and north of the Arctic Circle.

In February 1977, Captain Brown attended the Ships Material Readiness Course at Idaho Falls, Idaho, before assuming duty in July 1977 as the Director, Air Weapons Analysis Staff (OP-50W) in the Office of the CNO. Following several more months of training, Capt. Brown assumed command of the carrier USS Midway (CV-41) homeported at Yokosuka, Japan in February 1978. His tenure in command included an unscheduled deployment to the Indian Ocean after USS Ranger (CV-61) collided with a Liberian tanker in the Strait of Malacca. Midway arrived in the north Arabian Sea a few days after the U.S. embassy in Tehran was overran. While he was in command, Midway was also awarded the Battle E and the Marjorie Sterett Battleship Award for outstanding readiness.

In September 1979, Capt. Brown was designated a rear admiral while serving in a billet commensurate with that rank and assumed command of the Military Enlistment Processing Command at Fort Sheridan, Illinois, responsible for all Military Enlistment Processing Stations (MEPS) in the U.S. On September 1, 1980, he was promoted to rear admiral. In November 1980, he assumed command of Carrier Group One (CCG1) and embarked on carrier USS Coral Sea (CV-43) for a deployment to the South China Sea, Indian Ocean, Arabian Gulf, Exercise Bright Star ’82 in Egypt, and in the Sea of Japan on the return transit.

In Jun 1984, Rear Adm. Brown reported to the Office of the CNO as Director Strike and Amphibious Warfare Division (OP-954). He retired on September 1, 1985.

After retiring from active duty, Rear Adm. Brown took on another tough assignment, teaching math to junior high school students in the San Francisco area from 1988 to 1998. From 1992 to 1999, he served as the Principal of Summergate Secondary School in San Francisco, while also serving as an adjunct professor to the U.S. Naval War College, teaching a Master’s level seminar in Joint Maritime Operations in Bay Area from 1991 to 1997. He served in leadership capacities on numerous civic and professional committees and organizations, including serving as Chairman of the USS Carl Vinson (CVN-70) Committee from 1986 to 1994, as well Chairman of the as USS Hopper (DDG-70), USS McCampbell (DDG-85), and USS America (LHA-6) ship commissioning committees. He was also the Commander General of the Naval Order of the United States and the President of the San Francisco Council of the U.S. Navy League in 1995-1996. Oen of his most significant post-retirement activities was to serve on the Board of Directors and as Chairman of the Tailhook Association (1994-1999) restoring that organization to its rightful place as a premier Navy professional organization.

Interment will be at Arlington National Cemetery on a date to be determined. Tom’s wife, Martha “Marty,” was a former Navy Nurse, of whom Tom once wrote, “She is the primary reason for my success!”

Words will fail to adequately describe Tom’s profound impact on the U.S. Navy, but he epitomized what it means to be a U.S. Navy Officer and Naval Aviator. For all his incredible accomplishments and accolades, he was known to always give credit and honor to others, at one point stating that he “worked with the most wonderful human beings on the planet.” He was not given to talking about himself, but as the Director of Naval History, I can. His leadership of CVW-19 in the closing days of Operation Linebacker and then Linebacker II in Vietnam in late 1972, ranks among the most inspirational devotion to duty and combat leadership examples in the history of the U.S. Navy. Faced with ongoing peace talks expected to end the war at any time, and intense sentiment against the war in the U.S., coupled with ferocious North Vietnamese SAM and MiG resistance, it was an environment where no one wanted to be the last one to die in a war that wasn’t going to be won. Despite this, he led by example, from the front, in repeated effective strikes against the enemy as his profound sense of duty demanded, and yet he brought everyone back. Throughout his entire career, he displayed extraordinary leadership, took on the toughest tasks, never missing an opportunity to get in the cockpit, yet was known as a caring mentor to many, as well as a man of deep faith. His intense devotion to the U.S. Navy continued long after he retired and was exemplified by his role in resurrecting the Tailhook Association to honor all the naval aviators who served our nation with great valor for over 100 years. Or, as a note I received said, “I am sure he got the three wire in heaven.”