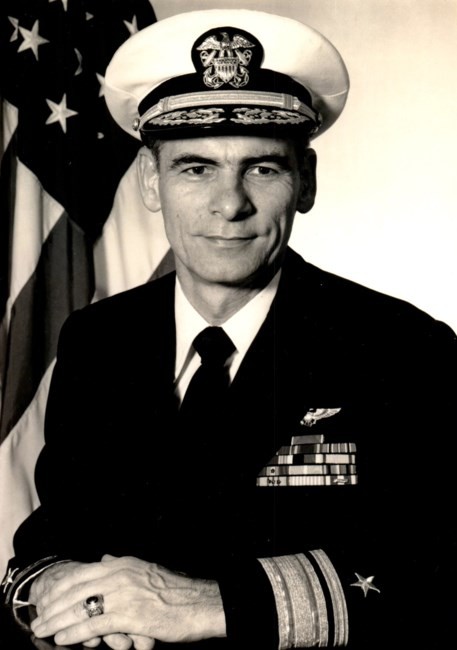 It is with deep regret I inform you of the passing of Rear Admiral Tyler Freeland “Ty” Dedman, U.S. Navy (Retired) on 26 July 2021 at age 94. RADM Dedman enlisted in the U.S. Naval Reserve in December 1943, graduated from the U.S. Naval Academy in 1947, and served as a heavy-attack pilot and Superintendent of the Naval Post-graduate School before his retirement in 1982 as Commander Iberian-Atlantic Area. His tours included three Vietnam War deployments as Commanding Officer of Heavy Attack Squadron TEN (embarked on USS Constellation (CVA-64) during the Gulf of Tonkin Incident), executive officer of USS Pickaway (APA-222), and commanding officer of USS Ponchatoula (AO-148) After retirement, he served as director of the U.S. Naval Institute.

Ty Dedman attended the University of California–Los Angeles (UCLA) before enlisting during World War II in the U.S. Naval Reserve on 9 December 1943. Accepted in the Naval Reserve Officer V-12 Program, he attended the University of Kansas until accepted into the Naval Reserve Officer Training Corps at the University of Colorado. He was then accepted to the U.S. Naval Academy, entering on 23 August 1944 with the wartime-accelerated class of 1948A. He graduated with distinction from the Naval Academy on 6 June 1947 and was commissioned an ensign. In August 1947, Ensign Dedman reported to the San Diego–based light cruiser USS Oakland (CL-95/later CLAA-94). In May 1948, ENS Dedman was assigned to the staff of Commander Naval Forces Western Pacific, based in Tsingtao (now Qingdao) China during the Chinese Civil War until most U.S. Navy forces evacuated in February 1949 as Chinese Communist forces surrounded the city and port (the last U.S. ship out was in May 1949). In February 1949, ENS Dedman was briefly assigned to the light cruiser USS Pasadena (CL-65) until he was accepted and detached for flight training.

In March 1949, Dedman reported to Naval Air Station Pensacola, Florida, for flight training. He was promoted to lieutenant (junior grade) in July 1950 and designated a Naval Aviator (HTA) on 1 November 1950. He then continued advanced flight training with Fleet All-Weather Training Unit Atlantic. LTJG Dedman reported to Attack Squadron THREE FIVE (VA-35). In July 1951, he embarked on carriers USS Leyte (CV-32) and USS Tarawa (CV-40). LTJG Dedman initially flew the AD-4L Skyraider (winterized version from VA-35’s previous Korean War deployment on USS Leyte—CV-32) before the squadron transitioned to the AD-4B (nuclear attack variant) and AD-4N (night attack variant) for operations in the European and Mediterranean theaters. Tarawa and VA-35 commenced an around-the-world deployment, arriving in the Korean War zone (but after the armistice) in the spring of 1954.

Promoted in July 1953, Lieutenant Dedman then attended the Naval Post-Graduate School at Monterey in June 1954 in the aeronautical engineering curriculum. Commencing in August 1956, LT Dedman took another year of study at Princeton University, graduating in June 1957 with a Master of Science in Aeronautical Engineering.

In June 1957, Dedman reported to Heavy Attack Squadron FIVE (VAH-5) at Naval Air Station Sanford, Florida, flying the A3D-2 Skywarrior, with a nuclear attack mission, embarked on carrier USS Forrestal for a Mediterranean deployment. He was promoted to lieutenant commander in May 1958. In May 1959 he reported to NAS Sanford as Flight Officer and A3J (Vigilante) Project Officer for Heavy Attack Squadron THREE, the Fleet Replacement Squadron for the A3D Skywarrior. Beginning in July 1960, Lieutenant Commander Dedman attended the Naval War College in Newport, Rhode Island, graduating in June 1961. Dedman was then assigned to the Bureau of Naval Weapons as a Project Officer/Attack Design Officer in the Aircraft Division of the Research, Development, Test and Evaluation (RDT&E) Group, where he worked on the design and development of the A3J (later A-5) Vigilante carrier-based supersonic bomber. He was promoted to commander in April 1963.

In June 1963, Commander Dedman assumed duty as Executive Officer of Heavy Attack Squadron TEN (VAH-10,) embarked on carrier USS Constellation (CVA-63) for a Vietnam deployment, flying reconnaissance missions over Vietnam and Laos. CDR Dedman assumed command of VAH-10 in August 1964 either just before or after the Gulf of Tonkin Incident in early August 1964. VAH-10 flew in support of the initial retaliatory strikes into North Vietnam following the North Vietnamese attack on U.S. Navy ships in the Gulf of Tonkin. In June 1965, CDR Dedman attended the Industrial College of the Armed Forces (ICAF) in Washington DC, before reporting in June 1966 as the Executive Officer of attack transport USS Pickaway (APA-222) conducting multiple amphibious assaults with embarked U.S. Marines against Communist Viet Cong concentrations along the coast of South Vietnam. He was promoted to captain in July 1967.

In August 1967, Captain Dedman reported to the Office of the Chief of Naval Operations as the Assistant Director for Navy Program Planning. In January 1968 he became Executive Assistant and Senior Aide to the Vice Chief of Naval Operations, Admiral Bernard A. Clarey. In January 1970, CAPT Dedman assumed command of the fleet oiler USS Ponchatoula (AO-148) for a Vietnam War deployment, conducting hundreds of refueling and resupply alongsides with ships in the Gulf of Tonkin and South China Sea, before then serving as alternate recovery ship for the Apollo 14 space mission.

In June 1971, CAPT Dedman was designated a rear admiral for duty in a billet commensurate with that rank and returned to the Office of the CNO as Assistant Vice Chief of Naval Operations (ADM Ralph Cousins and ADM Maurice Weisner) and Director of Naval Administration. He was promoted to rear admiral on 1 July 1972. In June 1974, RADM Dedman assumed duty as Deputy and Chief of Staff for the Chief of Naval Education and Training. In February 1978, Dedman was assigned as Superintendent of the Naval Post-Graduate School, Monterey, California. RADM Dedman’s last tour was in Lisbon, Portugal, as Commander, Iberlant-Atlantic Area, the North Atlantic Theater Organization (NATO) command responsible for NATO operations in the Eastern Atlantic, including the Azores, from February 1980 to his retirement on 1 November 1982. RADM Dedman was also dual-hatted as the Chief of the Military Assistance and Advisory Group in Lisbon. He was the last U.S. Navy rear admiral to hold the command as it was upgraded in 1982 to a NATO Major Subordinate Command under the command of a Portuguese vice admiral.

Following his retirement from active duty, RADM Dedman served as an aircraft accident investigator for major aviation insurance firms in coordination with the Federal Aviation Administration and the National Transportation Safety Board. He later served as an elected member of the Board of Governors of the National Associations of Security Dealers (NASD, now FINRA – Financial Industry Regulatory Authority). He was very active in church and community service activities in Lake Mary, Florida. He was the founding director and treasurer of the Mountain of Hope nonprofit medical clinic in Honduras. He was also past president of the Lake Mary Rotary Club, the Association of Naval Aviation Central Florida Chapter, and Sanford Area Retired Officer’s Association. He was a life member of the Naval Aviation Museum Foundation, a past director of the U.S. Naval Institute, and past chairman of the Naval Institute Editorial Board.

Although due to schooling and carrier scheduling, Ty Dedman missed combat in World War II, he had a ringside seat to one of the most momentous events of the 20th century, the fall of China to the Communist Party of Mao Tse-tung. U.S. Navy and Marine forces in Tsingtao provided aid to the Chinese Nationalists, but it wasn’t enough. After volunteering for flight training and earning his wings, Ty found himself in a particularly dangerous line of work in the cutting-edge of the Navy’s attempts operate a credible strategic nuclear deterrent from aircraft carriers. Fortunately, the United States never had to use this capability in anger; flying a single-seat propeller-driven AD-4B Skyraider on a nuclear bombing mission would have had a very low probability of survival for the pilot, from his own bomb. Even nuclear missions by the A3D Skywarrior were tacitly assumed to be one-way. Besides that, the transition from propeller to jet power on aircraft carriers was a particularly dangerous time to be a naval aviator, especially flying the huge twin–jet engine A3D (also known as “All Three Dead” due to the low probability of the three crewmen surviving any mishap, due to lack of ejection seats). Nevertheless, Ty excelled in this dangerous environment, becoming Commanding Officer of an A3D Heavy Attack Squadron at a pivotal point in the Vietnam War during the Gulf of Tonkin crisis. However, the Navy quickly shifted to the much more survivable nuclear ballistic missile submarines as the primary strategic deterrent force and the “heavy attack” community became a mostly dead-end career track—mostly. Ty proved that exceptional leadership and talent is still what mattered most and achieved flag rank via command of an oiler (where he was highly regarded by his crew). His tour as superintendent of the Naval Post-Graduate School may have been the most consequential of all, educating future generations of Naval Officers in critically needed career areas. His “twilight tour” at IBERLANT was a signal that his time was up, yet he still continued to provide great service to our Navy after retirement as Director of the U.S. Naval Institute, while also conducting some truly noble charity work. It is a truly amazing career of service to our nation that deserves to be remembered.